Women ‘being held back’ by prohibitive cost of taking discrimination, harassment cases 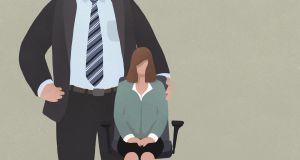 ‘It’s too much to expect people in cases like sexual harassment, pregnancy discrimination or complex equal pay cases to have the resources or capacity to represent themselves.’ Illustration: Getty

Women’s equality is being held back by the refusal of the State to support those taking workplace discrimination or harassment cases, a leading voice on equality issues has warned.

“That is pretty shocking. We talk about equality so much but when it comes to actually enforcing it, there is this gap. We have very good anti-discrimination legislation but enforcing it is out of many people’s reach due to costs. I do have concerns equality cases aren’t being taken because there isn’t legal aid for them.”

She said it was workers in the lowest-paid, least-unionised sectors who were most excluded from the WRC, though even well-paid workers will be put off.

“It’s too much to expect people in cases like sexual harassment, pregnancy discrimination or complex equal pay cases to have the resources or capacity to represent themselves. If you have a moderate or low salary, it will be difficult to get a solicitor to act for you.

“If you look at the records of the WRC, you’ll see there are very few equal pay claims being brought despite the fact we still have a 14 per cent gender pay gap. Those cases are very difficult to bring. If nobody is going to assist you to do it, it puts this barrier in the area of achieving equality in the area.”

Welcoming the commitment in the programme for government to examine the issue, she hoped the review would be independent and not carried out by the Department of Justice, which oversees the legal aid system.

“If we are talking about gender equality, we have to talk about gender justice, and accessing that means there has to be legal aid in equality cases,” said Ms Barry.

Her comments come as research published for International Women’s Day, which is on Monday, shows women aged 18-34 are twice as likely to be subjected to sexual harassment and violence as women generally, or as men their own age.

The Red C research also shows young women may be less likely to report such violence than older women. Orla O’Connor, director of the National Women’s Council, said the findings underlined the particular role third-level institutions had in “tackling sexual harassment and violence”.

Ms Barry said it was important women knew “employers and universities are under a legal obligation to ensure their employees or students have a harassment-free environment”.

Legal aid to enforce these obligations was vital, she added. “It’s really important that part of it isn’t lost, because laws are only as good as the rigour with which they are enforced.”