Survey points to major shift in opposition to gay marriage

Those opposing same-sex relationships down from 76% to 28% 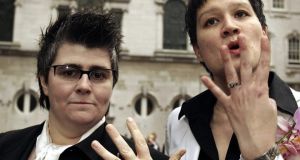 Grainne Close (left) and Shannon Sickels show off their wedding rings after becoming the United Kingdom’s first gay couple to marry in a civil partnership on December 19th, 2005 in Belfast


Opposition to gay marriage and same-sex relationships is collapsing, according to new social survey data in Northern Ireland.

The percentage of survey participants who believe that same-sex relations are “always wrong” dropped from 76 per cent in 1989 to 28 per cent in 2012, they say.

Research carried out by the Northern Ireland Life and Times Survey and analysed by Queen’s University and the University of Ulster points to a marked softening of attitudes.

Some 1,200 respondents, chosen at random across Northern Ireland and comprising a range of backgrounds, were questioned.

Queen’s academic Dr Nicola Carr, said that, despite the headline finding, there were some mixed results and a preference for the “traditional” heterosexual family remains.

“Over half of the survey’s respondents expressed support for same-sex marriage,” she said. “However, over one-third disapproved of gay adoption and also to lesbians having access to fertility treatment on the same basis as heterosexual women. At least one in four people did not believe that a lesbian or gay parent or parents with a child constituted a ‘family’.”


Attitudes
Dr Siobhan McAlister said that in terms of parenting and family life, attitudes were found to have changed less.

“Respondents declaring a Protestant affiliation were more likely to report negative attitudes towards same-sex marriage than Catholics, or people declaring ‘no religion’,” she said.