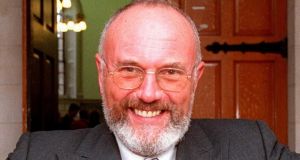 David Norris: one of the government’s strategies was a plan to persuade the court he was “not a ‘victim’ because he has never been prosecuted or questioned by the police”. Photograph: David Sleator

The government conceded in an internal memorandum in 1984 that a finding against it under European law in the David Norris case “seems unavoidable”, but it continued with its defence of the criminalisation of homosexuality.

The document outlined a number of strategies that Ireland could use to avoid losing the case at the European Court of Human Rights, including a plan to persuade the court “that Mr Norris is not a ‘victim’ because he has never been prosecuted or questioned by the police”.

In the same breath, it conceded, however, “the chances of succeeding in this argument are remote, because it cannot be said that the laws will not be enforced”.

As the government explored how to mount a stronger case in Strasbourg, one official suggested: “Health (Aids) as a defence?”

However, this proposal was later deleted from a letter circulated to ministers along with a strategy document signed off by minister for foreign affairs Peter Barry.

The document, dated November 1st, 1984, and drawn up in conjunction with the attorney general, noted Northern Ireland had decriminalised homosexuality two years earlier.

The reference to “commission” is to the European Commission on Human Rights which held preliminary hearings .

Therefore, it said, “in the absence of government instructions to the contrary, it is not proposed to draw on the written references to Christianity in the Constitution for the purpose of the defence”.

The government did, however, continue to mount a defence against Mr Norris, who was represented in Strasbourg by Mary Robinson.

Ireland lost the case in 1988 and decriminalisation took place in 1993 under provisions signed into law by Mrs Robinson – then president of Ireland.

Other files indicate that officials advised against proposed equality legislation in the workplace, recording “the absence of strong evidence” of discrimination against homosexuals.

The issue came before minister for labour Ruairí Quinn, who outlined the dilemma in a letter to attorney general John Rogers.

“Even if tackling discrimination on the basis of ‘sexual orientation’ seemed to be capable of actual enforcement in the sphere of employment, there would appear to be a difficulty about proceeding to address this issue in a liberal way in employment law while homosexuality is still treated altogether differently in the criminal code.”

The Employment Equality Agency, which was seeking for such discrimination to be outlawed, said it had sought documented evidence of discrimination from trade unionists but they had been “unable to provide such evidence”, apart from a single anonymous complaint.

In a private letter to Mr Quinn dated November 19th, 1986, Mr Rogers wrote that there was no legal obstacle to the government legislating against discrimination on grounds of sexual orientation even if certain homosexual acts were criminalised.

“I suspect, although this is a question of policy rather than law, that the real problem is to change the attitudes of fellow-workers and that the law may not be an appropriate instrument to do this.”

Discrimination on grounds of sexual orientation was finally outlawed in the Employment Equality Act, 1998.

Section 37, however, allows an exception for religious-run workplaces such as schools and hospitals to protect their ethos.

The Government has said it plans to amend this section to avoid discrimination against teachers, in particular.