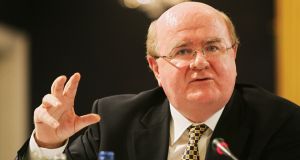 Introducing its proposals for universal pension scheme the Social Justice Ireland group claimed that every person over the age of 65 could have a pension of €230.30 per week if the current tax break for private pensions were to be reduced.

The organisation published its own costed proposals which it said would be possible to introduce as early as 2014.

The pension for all older people would be set at €230.30 a week (the same as the current contributory pension rate) until 2016 and then rise over time to 40 per cent of of average earnings.

“Ireland could have a universal pension for everyone over 65 funded principally by standard rating the current tax-break for private pensions, 80 per cent of which goes to the better off,” said Dr Sean Healy, director of Social Justice Ireland.

“This approach would be simpler, fairer and more just as well as being sustainable in the decades ahead,” he said.

He noted a recent review of the Irish pension system by the OECD had recommended the introduction of a universal basic pension as one of two options for reform. The second option was a means-tested basic pension.

The OECD, he said, was “not exactly a hotbed of radical left-wing thinking”. He believed the main arguments that might be offered against the universal pension proposal would be “based on ideology and not on any analysis”.

The State had “put a lot of its eggs into the private sector pensions basket” for a long time, he added.

“There seems to be at the moment an ideological resistence to anything that’s universal among some commentators and some policy people.”

The think-tank said no existing pensioner would lose out and many would experience an increase in income under the universal pension proposal, according to the report.

She said implementation of the universal pension proposal would provide “security, equity and certainty”.

The pension would be residency based. For each full year an individual was resident in Ireland between the ages of 16 and the State pension age they would accumulate a 1/40th or 2.5 per cent increase in the universal pension.

For example, if the state pension age was 66 and an individual had been legally resident for 30 years between the ages of 16 and 66 they would receive 75 per cent of the full rate of the universal pension.

The study for the document, A Universal Pension for Ireland, was conudcted by Adam Larragy of the University of London.

He said the authors of the 1919 Democratic Programme had believed that people in old age were ‘entitled to the Nation’s gratitude and consideration’.

“The universal pension envisioned in this document is a practical expression of this idea,” he said.

“It would be an assertion of solidarity between the generations, and between those with have more, and those who have less. It would be a recognition that we all contribute to this country, and that we are all entitled to a just share in our old age.”

Social Justice Ireland said that during the late 1990s and up to the present day, pension policy had provided large tax subsidies to those who needed them least, at significant cost to the Exchequer, while failing to guarantee adequate post-retirement incomes to the majority of the population.

The universal pension would provide older citizens, regardless of their previous social insurance contribution record or means, with a guaranteed income during old age.

In addition, it would provide a “secure and certain” framework around which citizens could plan for their retirement,

Over time it would also distribute income from the wealthiest in society to the poorest, the think-tank said.

Separately, research published by Bank of Ireland Life today suggested that half of Irish people agedbetween 30 and 45 have not yet started to save for their pension, despite many being concerned about their finances.

More than half said they were likely to take a part time job to supplement their income when they retired.