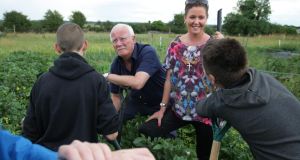 Three boys are marking out potato drills in the Roscommon sunshine. Afterwards they cook burgers and hot dogs on a small fire. This takes place on the allotment that a local farmer has donated to the Junction, the Garda Youth Diversion Project in nearby Ballinasloe, Co Galway.

Two youth workers, Edel Kelly and Paul Riddell, hover over the boys, watching the fire, seeing that the potato drills are straight. They’re steering with the lightest of touches. “Youth workers are informal educators,” says Riddell. “A lot of people forget that.”

On the day I visit this branch of the project it is looking after 10 young people aged between 12 and 17, all of whom had been referred to the programme by the Garda.

Then there are between eight and 10 teenagers who are secondary referrals – children at risk of offending who pretty much refer themselves, or are referred by their friends, even though their behaviour is so far undetected. “But we know about them,” says Kelly. “That’s the advantage of having conversations with young people.”

Most of the young people here have been failed by our education system. I ask Kelly whether any of the boys I interview have ever had a school assessment for learning difficulties or intellectual disability. “Not that I’m aware of,” she replies evenly.

She has been a youth worker for 14 years, and with the Garda Youth Diversion Projects for 10.

Riddell is from Ballinasloe, where his family had a shoe factory. He opened a bar and ran it “until the VAT man caught up with me”.

Riddell believes in second chances. He believes in the diversion project. “I like the way it has developed in the past couple of years. I’m no angel, but I believe these young lads deserve a second chance. ”

Most of the children arrive at the Junction having been suspended from school with low self-esteem, high impulsivity and a black vision of their future. “What we constantly try to do,” says Kelly, “is to promote a new way of thinking.”

The adults also try to think of new things. Kelly has been involved with young people receiving restorative cautions, in which they must confront the victims of their crime. She thinks these are the most effective. “Particularly with businesses [that have been robbed]. That’s the way I can see the system going.”

A year and a half ago Kelly and Riddell volunteered the Junction as a trial site for a review by Sean Redmond, who was head of young-offender programmes at the Irish Youth Justice Service.

Although Kelly and Riddell do not say so, taking part in the trial opened all participating workers to much scrutiny. In the end the trials were a great success, and the number of participating sites has been extended. Kelly is proud of having been a trial site. “It made us,” she says.

On this project Kelly is the youth-justice co-ordinator and Riddell is the youth-justice worker. There is a third member of staff, Katie O’Connor, who works one day a week. O’Connor has been working with two young men who have built a sulky, a light chariot for harness-racing. This is part of their project for Gaisce, the President’s Award.

Crime in Ballinasloe has fallen significantly since the Junction started. Total youth offences fell 14 per cent between 2010 and 2011, and 20 per cent between 2011 and 2012. But the cuts that have bitten savagely elsewhere have halted the opening of more projects. The money allocated for O’Connor’s salary will run out next month.

The popular diversion summer camp was cancelled this summer because of a lack of funds. The money for Riddell’s job, which comes from the European Social Fund, is due to run out in February 2014.

In his youth, Riddell was a footballer. He played outhalf for the Garbally and Connacht rugby teams. He played Gaelic football for Galway and soccer for Athlone.

“I’m passionate about working with the underdog. Rooney, Messi, Ronaldo: it’s easy to manage those guys. Eric Cantona was sacked, he was banned in France, he was extremely difficult. But when he went to Old Trafford Alex Ferguson gave him the chance to be captain of Manchester United. That’s what we’re about. Small changes make a big difference to young people.”