Same-sex marriage vote may be held before next election 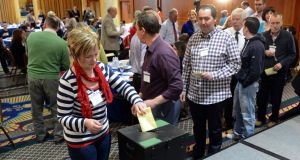 Voting at the Convention on the Constitution meeting in Malahide, Co Dublin yesterday. It recommended that the Constitution should be changed to allow for civil marriage for same-sex couples. Photograph: Eric Luke / THE IRISH TIMES

There was a “reasonable prospect” that the Government would hold a referendum on same sex marriage before the next general election, Minister for Justice Alan Shatter has said.

Had Mr Shatter been a member of the Constitutional Convention yesterday, he personally would have supported the recommendation made by it, he said. Yesterday 79 per cent of members voted in favour of extending marriage rights to same-sex couples.

The Government was committed to holding a discussion on the report of the Constitutional Convention, he said.“The issue of a constitutional referendum will thereafter be considered by Cabinet,” he said. It was for the Cabinet to decide on the holding and the timing of the referendum, he added.

Tánaiste Eamon Gilmore said he hoped there would be a referendum on same sex marriage. “I very much welcome the decision” of the Convention he said. “It is something we will be addressing in Government once the convention makes its report,” he said on his way into a conference at Dublin Castle today.

Mr Shatter told RTÉ he favoured first dealing with the issue of parenting and guardianship for gay couples. The members of the Convention also voted yesterday in favour of recommending that the State pass laws "incorporating changed arrangements in regard to the parentage, guardianship and the upbringing of children".

“ I think there would be a great deal of wisdom in that legislation being progressed and published before we go to a constitutional referendum,” Mr Shatter told RTÉ today. The issue was omitted from the 2010 Act legalising civil partnership for same-sex couples, he said. Mr Shatter is due to publish details of a Family Relationships and Children’s Bill to address such issues in the coming months.

Meanwhile the Union of Students in Ireland has pledged to register voters ahead of a possible referendum on same-sex marriage. “We must ensure that students are ready to translate their support for marriage equality into a positive referendum result,” union vice president for equality and citizenship Laura Harmon said in a statement today.The union is preparing a national student voter register drive, she said. The union was “heartened” to see strong cross-party support on the matter at the Convention, she added.

Asked yesterday what form the constitutional change should take, the convention - comprising one third politicians and two thirds ordinary citizens - 78 per cent of members voted for a directive amendment ("the State shall enact laws providing for same-sex marriage") while 17 per cent opted for a permissive amendment ("the State may enact laws providing for same-sex marriage").