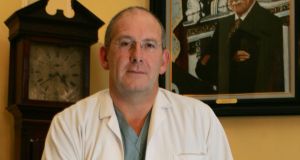 A lack of obstetricians in Ireland means requiring several of them to decide whether a woman should have an abortion was “totally impractical”, the master of the Rotunda maternity hospital has said.

As the Coalition parties failed to agree on new abortion legislation, one of only three psychiatrists in the State who treats pregnant women also said psychiatrists would not become “social policemen” in forcing women to go before panels of doctors to assess a need for abortion.

Weekend reports suggested that a pregnant woman who was suicidal would, under proposed new legislation, have her case reviewed by up to six doctors before being granted a termination. Labour sources claimed last night that up to 12 doctors could be involved in an appeals process. As the Constitution stands , termination on grounds of suicide risk is legally permissible here. Given that the only way that could change would be by another referendum – a highly remote prospect – and that the Government has pledged to enact new laws , those in favour of restricting abortion have focused on lobbying for the tightest possible “suicide test”.

Dr Sam Coulter Smith of the Rotunda told The Irish Times today that obstetricians were “underfunded, under-resourced and under a huge strain” and to take them away from their core activity would put further pressure on busy maternity hospitals.

The Rotunda had half the number of consultants it required and with a fast growing population in its catchment area its “infrastructure is creaking”, Dr Coulter Smith said.

If the legislation on abortion specified mental health and suicide as grounds for abortion it could “open the doors” for many pregnant women to come forward. Requiring several consultants to be involved in deciding a large number of cases could put severe strain on the profession, Dr Coulter Smith added. “There is a problem with legislation being very rigid and then requiring six consultants to be involved,” he said.

“It would be totally impractical,” he said.

Dr Coulter Smith said the legislation should be flexible enough to allow women to have abortions if their lives were at risk for any reason, whether because of cancer, suicide risk or other threats. The judgement of doctors should be trusted in assessing such need, he said.

“We need legislation which is flexible to allow us to cope with changes and improvements in medical care,” he said.

“You don’t want to find out in five or 10 years time that the legislation is out of date,” Dr Coulter Smith added.

Dr Anthony McCarthy, a psychiatrist who treats pregnant women at Holles Street, also said today the implication of proposals was that psychiatrists would become “social policemen” in judging a woman’s need for an abortion. The implication of proposals for legislation in requiring up to 12 doctors to review a case was that Government “don’t trust psychiatrists or don’t trust women or don’t trust either”, said Dr McCarthy, who is also the president of the College of Psychiatry.

He told RTÉ Radio 1 he would be happy to help advise the Government on the matter though he added it had turned down the college’s nominee to sit on an expert panel to advise on the legislation.

Prof Fionnuala McAuliffe of the Institute of Obstetricians & Gynaecologists said it the number of consultants required to review a woman’s requirement for abortion should not be set down since emergency cases do arise. “The last thing you want was if a woman’s life was in danger that a patient might die while you are waiting for someone to come in to see her,” she said.

The institute’s recommendation was that two obstetricians should be involved in assessing a woman for abortion and possibly other consultants depending on what condition was threatening her life. But consultants could discuss the case among themselves rather than individually examining the woman, she added. “More usually we would discuss cases rather than seek an examination,” she added.