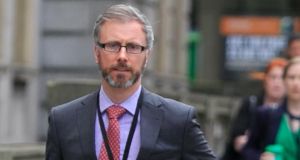 Minister for Children Roderic O’Gorman: says legislation to give adopted people access to their birth records, which had faltered during the last Dáil, would be introduced in 2021. Photograph: Gareth Chaney

Minister for Children Roderic O’Gorman first directly contacted the Attorney General’s office about a key legal aspect of data access rights to the mother and baby homes commission archive in October of this year.

Prior to this, Mr O’Gorman had relied on advice from officials in his own department who had been seconded as legal advisers from the Attorney General’s office when arguing that access to records in the mother and baby homes archive was “prohibited” by the legislation that governed the operation of the commission investigating the homes.

This position was outlined several times by the Minister in the Oireachtas.

In written answers to parliamentary questions in September, the Minister asserted that the GDPR right to access personal data is “expressly restricted by the Commissions of Investigations Act 2004”.

He also told the Dáil on October 22nd: “My department has engaged extensively with the Attorney General’s office on this issue and the advice we have received, to which the department is bound, is that the GDPR right of access to personal data set out in article 15 of the GDPR is expressly prohibited by section 39 of the Commissions of Investigation Act.”

Similarly, on October 21st, the Minister told the Dáil that he had “gone back and forth with the Attorney General’s office on a number of occasions on this point” and had been advised that “as for the GDPR and its interaction with the Commissions of Investigation Act, I have been advised that access to records is expressly restricted by that Act”.

However, a spokesman for Mr O’Gorman confirmed that the first time there was direct contact between the Minister’s office and the Attorney General’s office was in the week of October 19th, after a query about access to records in the archive had been raised by the Data Protection Commissioner.

There was engagement in February between the seconded officials and the former attorney general, Séamus Woulfe, on the general question of access to the archive, rather than the application of GDPR rights. However, the spokesman said that the view formed by the officials was that this advice was in favour of a blanket ban which prohibited GDPR rights.

Speaking at the Oireachtas committee on children on Tuesday, Mr O’Gorman said previous advice received by department officials from Mr Woulfe in February, “was that any access to the records would be prohibited by law, and any disclosure of the records would be an offence”.

In subsequent responses to parliamentary queries, Mr O’Gorman said his department had been relying on this interpretation of the 2004 Act.

Mr O’Gorman said the query sent to Mr Gallagher last month on foot of the Data Protection Commissioner’s concerns, had not been “identical” to the question Mr Woulfe had considered earlier in the year.

Addressing the Oireachtas committee, Mr O’Gorman said legislation to give adopted people access to their birth records, which had faltered during the last Dáil, would be introduced next year.

The Minister said he also hoped to bring a memo to Cabinet this month to introduce legislation for the reburial of the remains of babies at the former Tuam mother and baby home.

The first time the current Attorney General, Paul Gallagher, gave direct official advice on the matter was at the Cabinet meeting on October 28th, when he said the 2004 Act did not preclude the consideration of data access requests by his department. This was confirmed in written advice to the Minister thereafter; however, it is understood that the department’s advice that access was prohibited by the 2004 Act was even contained in the memo brought to that meeting.

Jennifer Whitmore, the Social Democrats TD for Wicklow, said there is an “onus on the Minister to be upfront with what advice was given, by whom, and when”.

“Throughout the debate, it was consistently the fallback position of the Minister that he could not accept opposition amendments relating to the primacy of the GDPR legislation on the basis that it went against the advice of the Attorney General. It now appears that this was not the case, and the Attorney General did not advise the Minister specifically in regard to the GDPR legislation,” she said. She called on the Minister to “fully explain his U-turn on the issue and the timeline of advice given”.