‘Policy Principles for a Progressive Irish Government’ discussed by 300 activists 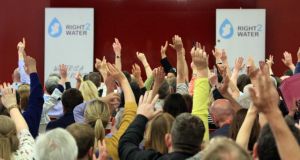 A show of hands on a vote at the Right2Water campaign policy conference organised by trade unions in Dublin on Saturday, June 13th. Photograph: Nick Bradshaw

The right to decent work, an end to the banks’ veto on mortgage resolutions and the abolition of water charges are among the measures in a new policy platform drawn up by Right2Water activists on Saturday, which will be presented at meetings across the State in coming weeks.

The ‘Policy Principles for a Progressive Irish Government’ was discussed at a conference in Dublin on Saturday, attended by about 300 activists including trade unionists, public representatives and academics.

It was hosted by the Right2Water unions - Mandate, the Civil and Public Service Union, the Communications Workers’ Union (CWU), Unite and the Operative Plasterers and Allied Trades Society of Ireland.

Written over the past six weeks, the document draws from more than 120 submissions from groups across the State and sets out an agenda on such issues as decent work, housing, health, and debt justice.

It comes following an initial meeting on 1st May, also hosted by the Right2Water unions, at which the idea of drawing up a wider policy agenda than one focussed solely on fighting water charges was first discussed.

Opening the conference, Congress president and general secretary of Mandate John Douglas said the aim was to engage the political activism that had grown during the Right2Water campaign in a push for wider political change.

“The underlying piece is that the Irish political elite does not represent our communities or our families. The social wage is very important – the quality of our communities, our services, in health and education.”

He hoped the new platform would bring disparate groups on the left together. Among those at the conference were members of People Before Profit, the Socialist Party, Sinn Féin and Independent left representatives.

“If we continue to cannibalise our own votes we will always be in a minority,” said Mr Douglas. “We are seeking to create a broad platform and to extend the campaign beyond the right to water.

“The vast majority of people in this country want to see a different type of politics.”

Steve Fitzpatrick, general secretary of the CWU, described the document as a “work in progress”.

“Over the next few months we will bring the documents to every citizen in every corner of the country. It will be like a roadshow where the document and the principles will be presented and local trade unionists, public representatives and community activists will be involved in bringing people together to talk about what kind of country we want.”

Describing the project as “very exciting”, he said nothing like it had ever been done in Irish politics before.

The campaign would not run candidates in the forthcoming general election, but candidates would be asked to endorse its principles.

Mr Fitzpatrick said there would also be “another national event” , such as a national rally or protest, during the summer to “keep momentum going”.