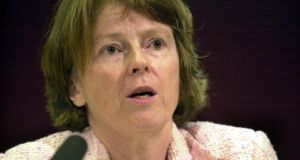 A retired High Court judge has said she asked the former minister for justice Alan Shatter to establish an inquiry into a Co Limerick direct provision centre due to her serious concerns over conditions there.

Ms Justice Maureen Harding Clark, who retired from the High Court earlier this year and who had served with the International Criminal Court from 2003 to 2006, told The Irish Times last week that she had grown concerned by assertions made by a number of asylum applicants who were housed in the Mount Trenchard centre at Foynes.

She had concerns that the centre was a place of “last resort” and was uneasy about the isolation of those housed there who were perceived as “problem makers”. She also had separate concerns about living conditions for asylum seekers arising from statements made in affidavits.

In response to her letter, Ms Justice Harding Clark said she was reminded by Mr Shatter of the separation of powers but said she felt the allegations made were so serious that her decision was justified.

The Mount Trenchard direct provision centre has been the subject of increasing controversy. In August, a number of residents were transferred with 10 minutes notice after helping to organise a protest against conditions there.

In an accompanying interview, residents described a volatile atmosphere within the centre and outlined problems with hygiene, food, facilities and the treatment of men with mental health issues there.

Greg Straton, the director of Spirasi, an organisation which provides support to victims of torture, said that 40 per cent of residents are among its clients and were not receiving adequate care. A local NGO, Dorais Luimní, has called for the centre to be shut down.

The Reception and Integration Agency (RIA), which provides accommodation for asylum seekers on behalf of the Department of Justice, said it could not comment on the individual cases but said it had no involvement in the decision by the contractor Alan Hyde to refuse access to Mount Trenchard.

Mr Hyde runs four other direct provision centres and was paid €9.9 million by the Department of Justice between 2000 and 2010. Asylum seekers are given €19.10 a week by the State.

The Reception and Integration Agency also said it had no comment to make on any correspondence which took place between a High Court judge and the then minister for justice and equality. Last week, it said it did not accept any of the claims made by the men.

In a previous response to a query from The Irish Times, the department denied that Mount Trenchard was used as a punishment centre.

Ms Justice Harding Clark told The Irish Times that the reliance on refugee law to migrate for a better life was a very complex situation.

While every judge was fully aware that that many applicants would fail to be recognised as refugees, their stay in Ireland “should be humane and dignified.”

However she also felt that many within the asylum system had behaved in a very responsible way. Mr Shatter’s response, she added, regarding the separation of powers, had “some validity”.

A judgment is currently awaited in the CA and TY judicial review which relates to the issue of the separation of powers. The case involves a challenge to the constitutionality of the direct provision system overall. The hearing ended on July 28th last.

Mr Hyde said last night that he had no comment to make.