Repeal of the Eighth Amendment is ‘very do-able’ 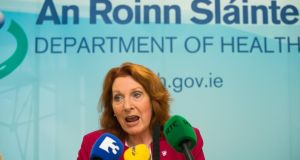 Minister of State Kathleen Lynch said repealing the Eighth Amendment of the Constitution to change abortion laws would be very “do-able” following the passing of the same-sex marriage referendum. Photograph: Gareth Chaney Collins

Minister for Children James Reilly has said the Constitutional amendment banning abortion should be repealed to allow for terminations in cases of fatal foetal abnormalities.

Dr Reilly made the comments after Minister of State Kathleen Lynch said repealing the Eighth Amendment is very “do-able” following the passing of the same-sex marriage referendum.

However, he said the issue will be a matter for the next Government because the current one has ruled out further referendums during its lifetime.

Speaking to reporters in Dublin, the Fine Gael TD said the attorney general has been clear that a referendum must be held if the matter of abortion in cases of fatal foetal abnormality is to be addressed.

“Now, I believe that that needs to be done but I’m also quite aware that the Government have decided that there will bne no further referenda during the lifetime of this Government.

“It’s something that I will be working very strongly for and very strongly toward and while it’s very well to say repeal the Eighth Amendment I believe we have to address this issue... in a manner that doesn’t deliver abortion on demand because I don’t believe that’s what the Irish people want,” he said.

Dr Reilly added that abortion in cases of rape and incest will also be discussed by Fine Gael as the party prepares its manifesto for next general election.

Earlier, Minister of State Kathleen Lynch said: “First and foremost we have to repeal that amendment to the Constitution and then sit down and legislate in a practical and reasonable fashion that will allow the people that treat women, when they find themselves in particular circumstances, to make decisions without that chilling effect hanging over them.

“I believe that if you’re forceful enough in your conviction, and I think we are, that repeal of the Eighth Amendment is very do-able, ” Ms Lynch told RTÉ radio.

Ms Lynch said couples who found themselves in “appalling circumstances” due to foetal abnormalities during pregnancy must be offered a remedy. “Unless we repeal the eighth amendment there’s very little we can do about that,” she said.

“It won’t be for everyone, it won’t be compulsory, but couples finding themselves in appalling circumstances... and having to travel abroad without the support of their families to have that remedy, it will be part and parcel of what needs to happen. And I don’t believe there’s anyone in the country that would deny that to people.”

Labour Senator Ivana Bacik said she believed the strong Yes vote in the same-sex marriage referendum would encourage some Fine Gael politicans to support a repeal of the Eighth Amendment.

“Labour led from the start on marriage equality and... Fine Gael moved to the same position,” she said. “The centre has moved on social issues.”

On Sunday, Tánaiste Joan Burton told RTÉ’s The Week in Politics the Labour Party’s 2016 general election manifesto would seek “on behalf of women to repeal the Eighth Amendment”.

“We will be putting, and want to put to the people, the repeal of the eighth amendment,” said Ms Burton.