Why are Ireland’s Catholic bishops dragging their heels on new Vatican questionnaire?

Opinion: The laity must actively support the reform agenda of Pope Francis 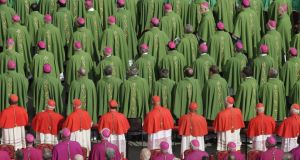 Bishops and cardinals attend a Mass to celebrate the opening of the Synod of Bishops in Rome in 2012. Why is a synod on the family being organised by a group of celibate males? Photograph: Reuters

Preparations for the 2014 Extraordinary Synod of Bishops to be held in Rome on the theme of the family from October 5th to 19th, 2014, include a 39-item questionnaire to be distributed to all Catholic faithful.

The results of this questionnaire will form the basis of an agenda for a further synod in 2015.

This unprecedented worldwide consultation among one billion Catholics on modern families, including questions on same-sex marriage, cohabitation, contraception and the place of divorced and remarried people in the church, is meeting with very mixed responses.

The secretary general of this synod, Cardinal Erdo, said that “the basis of the synod will be the doctrine of the magisterium and it will not be a question of public opinion”.

The Vatican press officer, Fr Lombardi, denied Pope Francis was polling the laity; it was, he said “part of a routine preparation document of a synod”. Bishop Hine from England spoke on Vatican Radio calling it “extremely significant”.

Equally the responses of the Catholic bishops’ conferences to the pope’s request for worldwide consultation has ranged from enthusiasm to the lukewarm. The bishops’ conference of England and Wales was the first to put the questionnaire online, on the SurveyMonkey site in late October and are ready to collate the results. Most English and Welsh dioceses have appointed co-ordination and information officers to help further this important initiative.

The bishops of Belgium have also placed the questionnaire online and seek replies by mid-December.

Seeming indifference
However the Irish bishops’ conference has yet to decide on how to respond. The Dublin archdiocesan response is representative of the seeming indifference of Irish bishops in not facilitating or promoting a user-friendly approach to answering this significant questionnaire; its website containing the total Vatican document merely requests that any discussion, feedback or proposals should be emailed to communications@dublindiocese.”

Yet the secretary of the synod on behalf of the pope, as far back as October 18th, had requested that the questionnaire be distributed “immediately as widely as possible to obtain concrete and real data on the theme of the synod”.

Furthermore, this a golden opportunity to have renewal in the Irish Catholic Church by conducting a nationwide consultation with the faithful and getting them involved in decision-making, having open days with lively discussion on these very important family issues.

There has not even been a Sunday Mass announcement about it.

Why are the Irish bishops ignoring the wishes of the pope by not actively involving the faithful in this significant development in the church? We Are Church Ireland has written to the bishops’ conference requesting it act immediately to promote this consultation process.

Bewildered
While the consultation is welcome, many of the questions and their expression are a cause of frustration and bewilderment. For example,
“2 (c) How is the theory and practice of natural law in the union between a man and a woman challenged in light of the formation of a family?”

“4 (a) Is cohabitation ad experimentum a pastoral reality in your particular church?”

Question 7(f), which asks the faithful, especially in the developing overpopulated world, for a response to “How can an increase in births be promoted?”, must surely rank as among the most inappropriate of all 39 questions.

What is incongruous is that a synod on the theme of the family is being organised by a celibate hierarchy with no mother or father in sight. Doubtlessly, hand-picked lay people will appear later at the synod, but a broad representation of lay opinion must be represented to make it credible.

Move forward
While the Vatican press office has played down this initiative as “routine”, it is a definite move forward in dismantling a clericalised church and recognising the sensus fidelium as a voice of the spirit in the church.

However, as evidenced by the resistance of many in the hierarchical church against this minimalist poll, Pope Francis faces a mammoth task in the promotion of a reform agenda.

It is time for the laity to support this reformist pope especially in his promotion of a more merciful and open church.