What does Catholic Ireland expect from Synod of Bishops?

‘As a woman, to know not one women will have a vote (at the Synod) is terrible’ 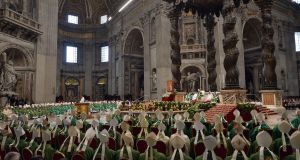 Pope Francis leads a mass for the opening of the synod on the family on Sunday at St Peter’s basilica in Vatican. Photograph: AFP 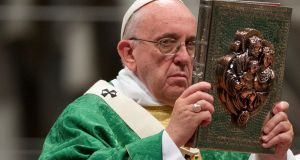 Pope Francis raises the book of the Gospels as he celebrates the opening Mass of the Synod of bishops, in St Peter’s Basilica at the Vatican, on Sunday. Photograph: AP 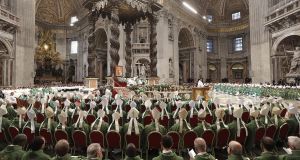 Prelates during the opening Mass of the XVI Ordinary Meeting of the Synod of Bishops, celebrated by Pope Francis, in the Saint Peter’s Basilica in the Vatican City. Photograph: EPA

So what do actively interested Irish Catholics expect from the three-week Synod of Bishops in Rome which opened with a Mass on Sunday?

Well, primarily, the bishops are there to start a debate about how the church should tackle the changing structures of modern families while trying to hold firm to the institution’s doctrine.

The three-week synod on the family, the ‘Vocation and Mission of the Family in the Church and Contemporary World as it is known, will address issues such as the prevalence of divorce, homesexuality, a reluctance among some co-habiting couples to marry and ways to reach out to lapsed or non-practicing cultural Catholics.

Irish Catholics will be represented by Archbishop of Armagh Eamon Martin and Archbishop of Dublin Diarmuid Martin among the 360 participants, including 166 bishops, archbishops and cardinals elected by national bishops’ conferences around the world, 22 heads of Eastern Catholic churches, 25 heads of Vatican congregations and councils, 10 heads of men’s religious congregations, an additional 45 synod fathers appointed by Pope Francis and 18 married couples there for consultation purposes.

Dublin theologian Gina Menzies hopes the bishops “take cognisance of insights of other sciences in relation to their understanding of marriage.

When the Catholic Church speaks on the issues of social justice or global economies it heeds the insights of many other disciplines and this is reflected in its teaching.

“The synod on the family needs be aware of the insights from the sciences of psychology, sociology and anthropology which have helped recognise that all marriages are partnerships of equals based on love and justice and hence equally possible in same gender, single parents, childless couples and bereaved persons,” she said.

Retired Derry teacher and member of the Association of Catholics in Ireland Seán Ó Conaill felt that family “has become a totem for the bishops, as if they were the preserve of all wisdom on the issue,” he said. He wondered whether there was “any dawning realisation” on those taking part “of lay exclusion from the Synod, especially women.”

Those who ticked the Roman Catholic box in the last census “but no longer come to Church need to be considered, need to be consulted. A new evangelisation must seek to reach them,” he said.

Margaret Lee, of the Seeds of Hope group in Killaloe’s Catholic diocese, found it “hard to engage with the Synod in its present format. Lay people will attend and will speak but do not have voting rights and therefore have no power.”

It “must face up to the fact that many of the people who use artificial contraception are very committed Catholics and have a deep faith in God and in the teachings of Jesus Christ.

One could say the same of many people who are in same sex relationships,” she said. It should also be acknowledged “that there are deep divisions within the church and those who have voting rights seem to be on one side of the divide,” she said.

Anthony Murphy, editor of the traditionalist Catholic Voice newspaper, said the Synod was “at a kind of cross roads between love according to the Word and love according to the world.” Ever since the Humanae Vitae encyclical in 1968, “repeated the teaching against contraception, a spirit of rebellion and subversion, ‘the smoke of Satan’, has been poisoning the life of the Church,” he said.

“Now, in 2015, the same rebellion has found another cause, also in the area of sexual morality: the plea to give Holy Communion to those in adultery and to give some form of approval to same sex unions,” he said.

It was “a God given opportunity for the Church to take her stand on the word of God and declare war on those forces seeking to separate us from God - and so free herself from the compromise that has frustrated her mission for so long.”

Soline Humbert of the We Are Church Ireland group said that “as a woman, to know not one women will have a vote (at the Synod) is terrible. It is vital that they realise there is something very wrong about no woman having a vote on the family.

Already it sends a signal that women are superfluous to the Synod. Why do we tolerate such marginalisation?” she asked.

Des Gilroy of the Howth Parish Reform and Renewal Group in Dublin felt “the Church must adapt its pastoral approach to the family situation with all its flaws as it exists today. Christ came to tend to the lost sheep, to the weak, to the troubled, not to condemn them but to nurture them.”

The Synod was “the first real and open challenge” which Pope Francis faced “in his mission to reform and renew the Church,” he said.

He had “every confidence that the Spirit is with him and that we will see a more understanding and nurturing approach to those currently in difficult situations, the divorced, those in second relationships, single parents, and particularly the children affected by the Church’s current hard line. I would also hope that the Synod recognises that, irrespective of sexual orientation, we are all children of God.”

Traditionalist Seáinín Mac Brádaigh felt it “highly unlikely that the Synod will emerge with any kind of radical departure from traditional Catholic teaching on the family, divorce or homosexuality. That is almost completely certain.”

But he did “expect there to be a concession to the divorced and remarried.” It was “a simple acknowledgement of reality. The amount of clergy refusing communion to the remarried is so infinitesimally small that it won’t cause any change in most churches whatsoever.”