Vocations crisis worse than in England and Wales 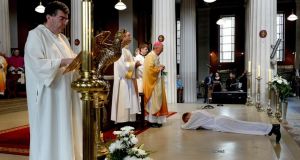 Last June the Catholic Archbishop of Dublin, Diarmuid Martin, said that in the archdiocese just two priests were under 40, while 44 were aged between 70 and 75 and “in the next four or five years will be going into a more retired sort of life”.

A total of 57 men have entered seminaries to study for the Catholic priesthood in England and Wales this year, compared to 14 in Ireland.

This is despite the fact that England and Wales have a combined Catholic population of four million compared with 4.65 million Catholics on the island of Ireland.

England and Wales, served by one episcopal conference, the Catholic Bishops’ Conference of England and Wales, has six seminaries, whereas there is one in Ireland, at St Patrick’s College Maynooth. Some Irish priests may undergo some training at St Malachy’s in Belfast and the Irish College in Rome.

In a survey the Irish Catholic newspaper established that the six seminaries admitted 57 men for formation this year.

Last June the Catholic Archbishop of Dublin, Diarmuid Martin, said that in the archdiocese just two priests were under 40, while 44 were aged between 70 and 75 and “in the next four or five years will be going into a more retired sort of life”.

This week he announced a greatly enhanced role for lay people in pastoral planning in the archdiocese.

For the first time lay people will participate in its 16 deanery meetings which, until now, were mostly attended only by priests. Deaneries meet four times a year to look at pastoral planning for the next quarter.