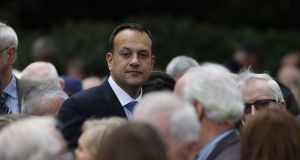 Taoiseach Leo Varadkar said he would be ‘loath to go down’ the route of interfering with religious groups. Photograph Nick Bradshaw

Taoiseach Leo Varadkar has said he does not know enough about Scientology to say whether any Government intervention in their activities is warranted.

However, he has no problem with Fine Gael TD Colm Brophy hosting a delegation from the church in Leinster House.

Asked about allegations that the church of Scientology was a cult, Mr Varadkar said: “I don’t know enough about it to give you an informed reply.

“I know there is a genuine concern about the fact or the possibility that it could be a cult. At the same time I think we always have to balance freedom of religion or freedom of association on the one hand with protecting people from being exploited, and that is always a challenge.

“I read stuff like you do, I don’t know enough about the Church of Scientology to know whether or to what extent the allegations made against them would require Government intervention of some sort.”

Speaking to journalists in a pre-Christmas interview, Mr Varadkar said that he would be “loath to go down that route of starting to interfere with religious groups or restrict people’s freedom of association in any way.”

Asked about an event for Scientologists in Leinster House hosted by the Dublin South West TD Colm Brophy, Mr Varadkar said: “I think Deputy Brophy may have hosted a delegation, so I don’t know exactly what it was about, but I wouldn’t have any difficulty in principle; I think it made sense.

“Even if you’re going to oppose somebody or oppose their plans or stand up to them, I think it always makes sense to engage them first and I think it is reasonable for a TD to actually engage with a group who are establishing a premises in their constituency,” he said.

In the same interview, Mr Varadkar said Government officials would meet with the representatives of the Vatican in the new year to plan the visit of Pope Francis to Ireland this summer, although the Government was awaiting clarification on how long exactly he intended to stay.

Pope Francis is committed to attending the Catholic Church’s World Meeting of Families in Dublin in late August but no final arrangements have been made for the visit.

Mr Varadkar said that there were ongoing contacts between his department and the Vatican in relation to the visit.

“We just don’t know yet if will be a very short visit just for the Meeting of World Families or whether it will be an extended visit involving other things such as Northern Ireland,” he said.

“But we are very much at their disposal and the Government will assist in any way to facilitate Pope Francis’ visit.”