Use of ‘Polyester Protestant’ term criticised by archbishop 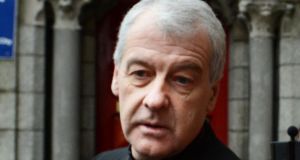 In an article in today’s Irish Times, Church of Ireland Archbishop Michael Jackson criticises those who had “hurt” other members because they had married outside the church, as well as those who had recently been “deeply pejorative” about the Catholic Church’s position on abortion. Photograph: Cyril Byrne

The Church of Ireland Archbishop of Dublin and Glendalough has criticised members who describe newcomers as “Polyester Protestants” in a fresh intervention in the debate on “sectarianism” in the church.

Archbishop Michael Jackson criticised those who had “hurt” other members because they had married outside the church, as well as those who had recently been “deeply pejorative” about the Catholic Church’s position on abortion.

In an article in The Irish Times today, he also lamented the treatment meted out in Ireland to members of his church who had fought in the two World Wars.

The archbishop recalls from earlier this year “deeply pejorative remarks I heard directed against the Roman Catholic Church by members of these [Dublin and Glendalough] dioceses to me because of its stance and principle on abortion.”

People also “speak with me and write to me about the continuing hurt to which they are subjected from within the Church of Ireland community because they married someone of a tradition other than their own, most usually a Roman Catholic person,” he says.

He also recalls the “lives of public and private shame” in Ireland forced on members of the church “who had fought both in WWI and WWII as Irish people and who were shunned as ‘disloyalists’ (my own phrase) in their communities on their return”.