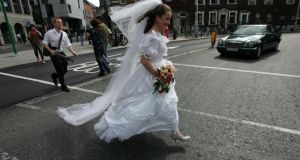 We should not consider redefining marriage, which is valuable as our most child-centred social institution. Photograph: Eric Luke

David Robert Grimes (June 26th) takes various people to task for “twisting” science to serve religion. But Dr Grimes does plenty of twisting in his own article to serve his own ends. Among those he took to task were Breda O’Brien and David Quinn, colleagues of mine at the Iona Institute.

He begins by referring to a study by Prof David Fergusson et al that deals with abortion and mental health. According to Dr Grimes, Breda “brandished” this study to claim that “abortion damages women”.

Previously, Breda had correctly summarised the study in her column in this newspaper. Fergusson et al , she wrote, “decided to examine the research in order to ascertain whether there were any mental health benefits to abortion. The findings are stark: ‘at the present time there is no credible scientific evidence demonstrating that abortion has mental health benefits’.”

Indeed, the fact that Dr Fergusson was on Morning Ireland recently appears to have escaped Dr Grimes’s attention. Interviewer Cathal MacCoille read out to Dr Fergusson a report about his study that appeared on the Iona Institute website. Despite claims to the contrary, Dr Fergusson did not express unhappiness at how his study was quoted. Morning Ireland clarified this on air two days after the Fergusson interview.

Dr Grimes adopts the same cavalier approach towards David Quinn, director of the Iona Institute. He said that David claimed “gay parents are not good for children”. Where did David say that?

What David and others at the Iona Institute have said is that the best available evidence shows that children achieve the best outcomes on average when raised by their own biological parents in a low-conflict marriage. This is highly relevant from a public policy point of view.

It is in this context that a paper from the US organisation Child Trends (among other papers) is quoted. The paper is called Marriage from a Child’s Perspective: How Does Family Structure Affect Children and What Can We Do About It?

Does that paper say anything about children raised by same-sex couples? No, it doesn’t. Why doesn’t it? Child Trends itself gives the reason: “This Child Trends brief summarises research conducted in 2002, when neither same-sex parents nor adoptive parents were identified in large national surveys. Therefore, no conclusions can be drawn from this research about the well-being of children raised by same-sex parents or adoptive parents.”

The studies the APA relies on usually comprise very small, non-random samples. In addition, they often fail to use comparison groups. Shouldn’t Dr Grimes have pointed some of this out in the interests of scientific honesty?

Based on research to date, we simply cannot say with any real precision how children raised by same-sex couples are faring. Until sufficient good- quality research is conducted, we must withhold judgment and not even consider redefining marriage, which is so valuable as our most child-centred social institution.

Dr Grimes accuses his opponents of misusing data for religious ends (on the mistaken assumption that objections to abortion and same-sex marriage are exclusively religious). However, in his error-strewn article, what he really proves is that ideology can lead people, including himself, to misrepresent the facts.

Dr John Murray is a lecturer in moral theology/Christian ethics in the Mater Dei Institute of Education, Dublin, and is chairman of the board of directors of the Iona Institute