Synod on the Family: Pope Francis is calling on us to end indifference and engage with people 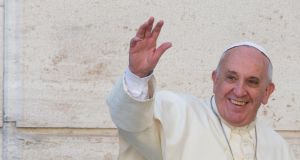 ‘Pope Francis called for discussion on family life, and we are getting discussion, but we have not been used to grown-up discussion in the Catholic Church. Instead, we have been excellent at mutual excommunication, and caricature.’ above, Pope Francis waves to members of the media as he leaves a morning session of the synod on family issues, at the Vatican. Photograph: AP Photo/Alessandra Tarantino

Anyone trying to understand the interim discussion document which emerged from the Synod on the Family this week could do worse than read a blog post by young American mother Calah Alexander, even though it was written two years ago.

She describes being a crystal meth addict, trying to get her life together when she discovered she was pregnant. She was not Catholic, but she and her Catholic boyfriend started talking to a Cistercian priest.

They wanted to get married, but the diocese that they lived in did not allow couples in their situation to marry until the baby was at least a year old. Calah talks about how living apart for the year would have been really, really difficult for her, given her state of emotional and mental instability. Her boyfriend was working almost full time while trying to finish a degree, and could not afford two households. Calah worried about how she would parent the baby virtually alone.

People were full of advice. Live like brother and sister, they were told. Calah wryly notes that this is widely acknowledged to require heroic virtue from even the most virtuous, “yet the likelihood that two people who hadn’t attempted to live virtuous lives, basically ever, would be able to accomplish it was somehow not of interest to solicitous advice-givers”.

The Cistercian priest spent hours with them, individually and alone, trying, as she says, to help them begin to build a foundation “that might one day support a solid family”.

He was with them for the long haul, gently, firmly, nudging them towards taking responsibility, but not expecting them to jump straight to sainthood. As part of the process, he suggested that they have a civil marriage, and not to live as brother and sister, because he believed that it would put too much of a strain on them at a tumultuous and difficult time.

Some staunch Catholics were horrified, and avoided their company. Their parish refused to baptise their daughter. When Calah applied to enter the Catholic Church, a couple who did marriage preparation for the diocese recommended that she not be received into the Church.

That’s an example of gradualism – helping people edge their way towards a very high ideal, loving them where they are, and always, always reminding them that there is another step on the road, but you don’t have to take it alone.

Much of what the document says has been given zero coverage – like this sentence that declares the importance of clearly denouncing “the cultural, social and economic factors, for example, the excessive room given to market logic, that prevent an authentic family life, leading to discrimination, poverty, exclusion, and violence”.

As for the much-quoted passages on homosexuality, they are asking questions without easy answers, but they are really important questions.

As the document asks about gay people, “Are our communities capable of providing that, [welcoming home] accepting and valuing their sexual orientation, without compromising Catholic doctrine on the family and matrimony?”

Sexual orientation is not the sum of a human being, but it is an important part. The document is suggesting that we need to be able to accept people for who they are, yet without compromising key Catholic teachings.

Calah Alexander and her young husband-to-be were not able to put the whole of Catholic teaching on sexuality into practice at first, but they wanted to do their best for their baby. Who acted like Christ, the priest who listened to them and helped them grow or the people who were horrified at their inability to fulfil all of the requirements?

And yet, their Cistercian priest also didn’t tell them they were wonderful and that they didn’t need to change a thing. The modern idea of mercy is often actually just thinly disguised indifference – not really caring enough about other people to support or indeed, challenge them.

Pope Francis is calling us to end that indifference and to start to engage with people. It’s hard, messy work, but work that will eventually decide the success or otherwise of any family synod.

1 Love in a time of Covid: John and Mary marry over 40 years after first meeting
2 Sinn Féin’s stand on Covid is facing increasing questions from political rivals
3 Cab investigates behind the massive gates of Chosen Few Motorcycle Club in Dublin
4 Big Phil is being very big about his former boss’s Covid quarantine trip
5 Two hundred Irish retailers for all your online Christmas shopping
Real news has value SUBSCRIBE