Opinion: Tradition of veneration of saints’ remains goes back to the Roman catacombs 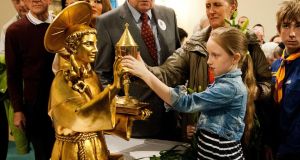 The recent visit of the relics of Saint Anthony of Padua drew thousands of faithful throughout an eight-day Irish tour. It is estimated that 30,000 alone filed past the relics at St John’s Cathedral, Limerick. Altogether, the visit took in Dublin, Wexford, Cork, Limerick, Galway and Belfast.

The veneration of saints’ bodily remains, or relics as they came to be known, goes back to the catacombs of Rome, where it was an honour to be buried in the resting place of martyrs. When the empire crumbled, catacombs were emptied and the martyrs were reburied in churches.

These churches became places of pilgrimage. Eventually, the remembrance and veneration of saints grew outside of Rome with their relics, often being divided and carried to far-flung Christendom. These remains were typically buried under altars or embedded within them.

Some relics of the Apostle James, for example, were rediscovered in northern Spain in 813 AD. El Camino de Santiago, the “way of Saint James”, is one of the enduring manifestations of Christian pilgrimage and veneration of the saints to this day.

Other notable reliquaries are those of Padre Pio; Thérèse of the Child Jesus and Francis of Assisi, and including the tombs of Blesseds John XXIII, John Paul II and the first pope, Peter, in Rome’s St Peter’s Basilica.

Authenticity
The Church of Vatican II continues in placing saints’ remains beneath the altar of churches, where these relics must be recognisable parts of human bodies and their authenticity verified.

The practice points both to Christ’s love-unto-death expressed and realised in the Church’s liturgy and the love-unto-death that all Christians are to bear in daily life, in the likeness of Christ; the saints and martyrs being exemplars.

Though such relics are but bones, withered flesh or vials of blood, they are the elements of beautiful human life, of bodies possessed in time by God’s breath and spirit; “temples” with character that was transparently Christ-like.

The Church proclaims these lives have reached the achievement of God’s promises and she proposes their remembrance and veneration that those after them would draw direction, inspiration and hope.

The Church today also looks on with respect and regards as relics objects that belonged to the saints, such as personal items, clothes, manuscripts, including objects that touched a saint’s body or tomb, like oils, cloths and images. The mittens of Padre Pio come to mind.

While the celebration of the Eucharist gathered at the altar remains the singular greatest moment of spiritual union with the saints, there are other means to soak up their witness. The various forms of popular veneration of relics include their kissing, touching, decoration with lights and flowers; processions and fiestas in public.

Patterns and rounds
In Ireland, there is the practice of patterns and rounds; notable among which is the cult of St Gobnaid of Ballyvourney, where the stone statue of Gobnaid by Séamus Murphy has become a relic by acclamation.

On July 1st 1681, Oliver Plunkett, Archbishop of Armagh, became the last Roman Catholic martyr to die in England. His remains were exhumed in 1683 and moved to the Benedictine monastery at Lamspringe in Germany. Later, his head was brought to Rome and from there to Armagh and eventually to Drogheda, where it has rested in St Peter’s Church, Drogheda since 1921.

In 1995, a new shrine was built at St Peter’s, allowing pilgrims to walk around and view this precious relic of the Church in Ireland. One can also view its original authentication, signed after Plunkett’s martyrdom. Thousands visit this shrine every year; some no doubt as tourists and sightseers, but, also, so many in faith and admiration for a life in truth, service and loyalty.

That the young and the seasoned, the windswept and curious, filed past the reliquary of St Anthony of Padua in recent days, then, should not be surprising. Though he died in 1231, Anthony’s regard as a popular Franciscan preacher and messenger of hope has reached to our time.

Though, too, all of him on view was but petrified remains, people sense in such relics that human beings are more than flesh and bone; that a spirit, the soul lives on and remains the collaborator, the instrument of greatest power – God.

The church teaches that the saints are in God’s glory and participating in perpetuity in the work of Christ; sole mediator between Heaven and Earth.

Many will have hoped these past weeks that their tangible, touchable encounter with Anthony will have found them some lost treasure: “faith that God, indeed, loves them”.

Fr Danny Murphy is a priest of Cloyne diocese and director of the National Centre for Liturgy of the Irish Catholic Bishops’ Conference.

1 Civil War rape which led to pregnancy recalled in new TV documentary
2 Martin ‘seriously concerned’ at Covid complacency amid pressure over church events
3 The far right rises: Its growth as a political force in Ireland
4 The Sack of Balbriggan: The burning of a town that shocked the world 100 years ago
5 Golf group insist they adhered to public health guidelines during Tullamore trip
Real news has value SUBSCRIBE