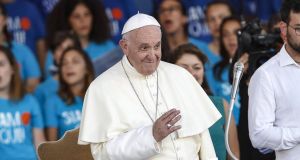 This is the weekend of Pope Francis’s visit to Ireland, an event that will give pleasure and encouragement to many across this island.

This compassionate man speaks for many, religious and non-religious alike, as for example when he challenged Donald Trump about environmental issues during the American president’s visit to Rome last year.

Pope Francis comes to an Ireland where the churches, burdened by serious past failures and a loss of commitment by many, are in difficulty. He recognises the need for change in his own church, even though it is reported that he meets with resistance from within. But he persists: “I prefer a church which is bruised, hurting and dirty because it has been out on the streets, rather than a church which is unhealthy from being confined and from clinging to its own security.”

In Gaudete et Exsultate, Francis wrote about the church in society. He affirms ordinary church members by encouraging them to be “the saint next door”; living the Gospel as best they can. He dismisses spiritual elitism, stating that sainthood is not only for bishops, priests and nuns or those “swooning in mystic rapture” but also for ordinary people doing small acts of kindness and love.

His pastoral instincts are evident in his frustration with rules that lack compassion. “Not infrequently, contrary to the promptings of the (Holy) Spirit, the life of the church can become a museum piece or the possession of a select few. This can occur when some groups of Christians give excessive importance to certain rules, customs or ways of acting.”

And while he strongly defends the life of the unborn, he says that “equally sacred however are the lives of the poor, those already born, the destitute, the abandoned and the underprivileged, the vulnerable infirm and the elderly exposed to covert euthanasia, the victims of human trafficking, new forms of slavery, and every form of rejection.”

Tomorrow’s readings make for interesting reading this special weekend. From the Old Testament we read about Solomon’s Temple in Jerusalem.

While Solomon declares his temple to be a very holy place, he acknowledges that God is not confined to or limited by it: “But will God indeed dwell on the earth? Even heaven and the highest heaven cannot contain you, much less this house that I have built!”

It is a point easily overlooked in church life; God cannot be confined within our buildings no matter how fine or limited and controlled by human rules. If that were so, he/she would not be God.

There is a need for the church to step beyond the comfort zone of sacred buildings and solemn liturgies and engage gently with people in the marketplace of everyday life as Jesus did. “Example moves the world more than doctrine.”

The Gospel reading has a cautionary word for anyone who has exaggerated expectations of the pope’s visit.

Jesus is teaching in the synagogue in Capernaum but not everyone is comfortable with what he is saying, including many of his disciples.

We are told they “turned back and no longer went about with him”.

Jesus then turns to his closest followers and asks: “Do you also wish to go away?”

Simon Peter answered him, “Lord, to whom can we go? You have the words of eternal life. We have come to believe and know that you are the Holy One of God.”

The same question is asked of us today and just as in Capernaum long ago people are free to stay or leave.

Peter, determined to stay with Jesus at that time, was not so sure when things got scary in Holy Week, but Jesus never gave up on him which gives us hope.

Peter is of great significance in the history of the papacy, which like him has had its successes and failures. But this weekend Pope Francis reminds us of the continuity of hope in a world of confusion and despair. That ability to hope, according to Carlo Carretto, “is the greatest gift that God could make to man”.

1 Cork shootings: Gardaí find lengthy apparent suicide note on one of the dead men
2 Johnson’s Brexit Bill set to be blocked by House of Lords
3 Two hundred Irish retailers for all your online Christmas shopping
4 Former solicitors ran an ‘identity factory’ in committing fraud – court told
5 Son (23) who died in suspected Cork murder-suicide was due to graduate
Real news has value SUBSCRIBE