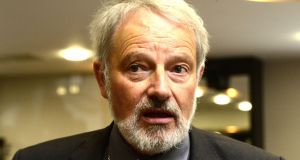 Bishop of Elphin Kevin Doran has asked if we have lost sight of the fact that many of our own people have been and still are strangers and sojourners’ in foreign lands. File photograph: Cyril Byrne/ The Irish Times

A Catholic bishop has warned against “disturbing signs of racial prejudice” in Ireland and said the direct provision system “contributes to the deepening of ignorance, resentment and suspicion” towards asylum seekers.

He also said support for extreme nationalism, “is a symptom of ideological racism which, like a virus, is always with us in some form”.

Bishop of Elphin Kevin Doran asked if we have lost sight of the fact that many of our own people have been and still are strangers and sojourners’ in foreign lands.

“Have we forgotten that many of ‘our’ essential services are provided by people who have come to Ireland from Eastern Europe, Africa, Asia and the Middle East?” he asked.

Writing in the latest edition of Intercom magazine, produced by the Irish Catholic bishops as a resource for priests, Bishop Doran said that “while the majority of Irish people are welcoming of the ‘new neighbours’, there are some disturbing signs of racial prejudice, especially towards those who have arrived as refugees and those who don’t speak our language or share our culture”.

He said at their summer meeting in Maynooth last June, the Catholic bishops expressed concern at “the rising number of incidents of racism, xenophobia, and religious intolerance in Ireland – carried out sometimes by those who consider themselves faithful Christians – and which can occur anonymously or otherwise on social media, in quiet conversations, by open verbal onslaughts or through physical violence”.

“Why would this be happening in Ireland, especially considering our strong missionary tradition and our ethos of support for the work of organisations such as Trócaire, Concern, and Goal?” he asked.

There was a need “both as a community and as individual Christians, to take action to prevent racism, or to root it out wherever it exists”, he said.

This could be done through reaching out “the hand of friendship to people from other countries and religious traditions”, he said.

“We can advocate for the development of a humane and racially equitable policy in relations to immigration and asylum. Direct provision may not be motivated by racist ideology, but in practice, it is designed and operated in such a way that it prevents people from integrating, and in that way it contributes to a deepening of ignorance, resentment and suspicion,” he said.

He said people can “work actively against any vision of Europe which seeks to exclude the participation of less well-off nations, or which involves the exploitation of third world countries”.

“We might not like to admit it, but the present increase in support for extreme nationalism, with its focus on building walls and fences, is a symptom of ideological racism which, like a virus, is always with us in some form,” he said.