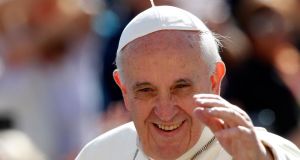 Taoiseach Enda Kenny said in Dundalk that Pope Francis was “a very different personality to any of his predecessors. I think he recognises the challenge that faces the church and he is trying to address that in a very different way.” Photograph: AP

Taoiseach Enda Kenny was among those who yesterday welcomed the call by Pope Francis for a new balance within the Catholic Church and greater involvement of women. The pope did so in a 12,000-word interview published on Thursday in 16 Jesuit publications worldwide

Mr Kenny said in Dundalk that Pope Francis was “a very different personality to any of his predecessors. I think he recognises the challenge that faces the church and he is trying to address that in a very different way.”

Redemptorist priest Fr Tony Flannery, who was silenced by the Vatican last year and removed from public ministry as a priest, told The Irish Times he was “delighted” at what Pope Francis had to say about cases such as his and that they should be dealt with by the local church. He now looked forward “to a speedy resolution of the case”.

The Gay and Lesbian Equality Network has cautiously welcomed Pope Francis’s latest comments on gay people.“The Catholic Church in Ireland has vigorously opposed change for LGBT people,” chairman Kieran Rose said. “This could be the beginning of a transformative change in the approach of the Catholic Church to lesbian, gay, bisexual and transgender people.”

He added that “the Irish Catholic Church’s response to forthcoming referendum proposals on civil marriage will demonstrate the practical effects the pope’s comments are having”.

The Association of Roman Catholic Women Priests also welcomed the pope’s comments, but “our brothers at the Vatican must embrace gender justice, including women priests. Women’s human rights, including spiritual authority, is the elephant in the living room of the Roman Catholic Church.”

Jon O’Brien of Catholics for Choice welcomed the call for the church to be “home for all” and not a “small chapel” focused on doctrine and limited views on moral teachings.

1 Storm Dennis washes abandoned ‘ghost ship’ onto rocks off Co Cork
2 Caroline Flack death: Public disquiet over media conduct grows
3 Storm Dennis: Thousands without power as wind warning issued
4 Life as a female TD: ‘If I had a euro for every time I’ve been called the C word’
5 Minister accuses Sinn Féin of ‘giving up’ on forming government
Real news has value SUBSCRIBE