The pope will say Mass in Sarajevo, 20 years after siege left thousands dead 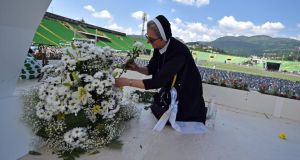 A nun arranges flowers on the stage at Sarajevo city stadium ahead of the visit of Pope Francis. Photograph: Andrej Isakovic/AFP/Getty Images

Meeting with his cardinals on the day after his election in March 2013, Pope Francis exchanged a few significant words with the Archbishop of Sarajevo, Cardinal Vinko Pujlic:

“Holy Father, we’re not far away, only an hour by plane,” said the Bosnian cardinal.

As he travels to Sarajevo this morning on his eighth international visit, Pope Francis is once again outlining the priorities of his pontificate as he visits yet another “periphery” of the Catholic Church.

As the country of 3.8 million people struggles to move forward under the cumbersome three-way federation presidency of Bosnian Muslims, Orthodox Serbs and Croatian Catholics, Francis travels to Sarajevo with a message of hope.

“With the help of God I come among you to confirm the faith of Catholics, to support ecumenical and interreligious dialogue and especially to encourage peaceful co-existence in your country,” said the pope in a midweek TV message to the people of Sarajevo.

This trip, for which the motto is Mir Vama (Peace to You), very much follows on from the pope’s visit to another periphery, Albania, last September.

On that occasion Francis praised the level of dialogue, “peaceful co-existence and collaboration” between Muslims, Catholics and Orthodox Christians in the wake of the 1991 collapse of the Enver Hoxha communist regime. The basic message was clear enough: look, peace is possible, dialogue is essential.

At the Srebrenica Genocide Museum yesterday in central Sarajevo, your correspondent asked our guide, Aida, what will be the impact, if any, of the pope’s visit today.

“I don’t know.” she said. “Sometimes the simplest questions are the hardest to answer. He is a world figure and he will talk about these things and maybe he will help people to know about them. Maybe it will help.”

At a Mass this morning in Sarajevo’s Asim Ferhatovic Hase sports stadium, a mixed choir of Muslims and Christians from Srebrenica will perform a song called Love People.

Maybe that will help, too.