Papal nuncio ‘out of sync’ with Irish reality, say priests 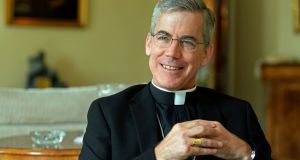 A group which claims to represent almost a third of Ireland’s Catholic priests has severely criticised papal nuncio Archbishop Charles Brown over his selection of bishops. It just stopped short of asking for him to be replaced.

The Association of Catholic Priests (ACP) said it was “reluctant to call for Archbishop Brown’s removal” but felt it “instructive that his appointment was a central part of Rome’s response to the problems of the Irish Church”.

It “was widely interpreted as an opportunity of disciplining the Irish Church” the ACP has said.

Since his arrival in Ireland, Archbishop Brown has been involved with the appointment of 10 bishops and is in the process of appointing six more.

It expressed “grave disquiet” at the “lack of consultation” involved, as well as a “preference for candidates drawn from a particular mind-set”.

There was also what it described as “an apparently haphazard policy of appointments to distant dioceses that pays little regard to the traditions and heritage of a diocese; and the choice of candidates who seem to be out of sync with the realities of life in Ireland today and uncomfortable with the openness of Pope Francis to change and reform the Church,” it said.

The ACP also regretted that Archbishop Brown refused to meet them “though the issue at hand is of compelling concern not just to our own membership – we represent over 30 per cent of Irish priests – but to the vast majority of Irish priests”.