‘No obstacle’ to gays marrying, just not each other, says bishop 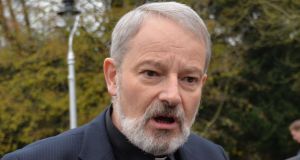 The Catholic Bishop of Elphin Kevin Doran has said: “Part of the challenge for us as a society, of course, is that we (and that includes many practising Catholics) have to a greater or lesser extent given up on the idea that sexual intercourse and an openness to procreation are essentially linked. That makes it more difficult to get our heads around why there might be any problem about changing the meaning of marriage.” File photograph: Alan Betson/The Irish Times

Marriage originated within primitive societies and was not a concept started by any religion, a bishop has said.

“Marriage is not an invention of Christianity or indeed of any religious tradition,” Catholic Bishop of Elphin Kevin Doran said.

“The reverse in fact is the case. Primitive societies recognised the uniqueness of the male-female relationship, written in human nature,” he said.

Speaking in Dublin’s Holy Trinity Church, Donaghmede, on Monday night, he said, “You don’t have to be a Christian to recognise the truth about human sexuality; the joy of it and the heartbreak of it.

“Reason allows us to see the contribution that faithful marriage offers to society through the stability that it brings to society and to the lives of children,” he added.

On the issue of this May’s marriage referendum, he continued: “The reality is that those who wish to change the Constitution are not actually looking for marriage equality.

“This is only possible if we change the meaning of marriage and remove that aspect of openness to procreation.

“Part of the challenge for us as a society, of course, is that we (and that includes many practising Catholics) have to a greater or lesser extent given up on the idea that sexual intercourse and an openness to procreation are essentially linked.

“That makes it more difficult to get our heads around why there might be any problem about changing the meaning of marriage.”

Recalling how a politician asked him last week, “What is so wrong about being nice to people who are equal to us in every respect, but whose sexual orientation is different?” he said, “The answer of course is that there is nothing wrong with being nice to them, but that is not what the referendum is about.”

He said: “Let me express what I want to say in the form of a few questions:

“A. Can we recognise the fundamental goodness of people who are of homosexual orientation? Yes.

“B. Do we believe that they are loved by God? Yes.

“C. And that they are equal in dignity to every other person? Yes.

“D. Can they be actively involved in the life of the Church? Yes.

“E. Can friendships between people of the same sex be good, even if they are sexually attracted to one another? Yes, of course.

“While marriage is the ‘primary and most unique friendship’, there are many other kinds of friendship which are blessed by God. Friendship is an aspect of love, and love is the path to holiness.

“F. Can people of homosexual orientation receive the Eucharist? Yes, on exactly the same basis as heterosexual people, who are likewise called to the virtue of chastity.

“G. Can we engage with them in pastoral care for the family? Yes, of course.

“This is quite interesting, because most people would probably say that they cannot legally do so. But, of course there is no legal obstacle to a person of homosexual orientation getting married, just as a heterosexual person can.

“To that extent the question of marriage equality simply doesn’t arise. (Whether it is good or just or wise for a homosexual person to enter marriage is another question.)”