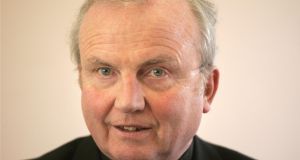 The new Catholic Bishop of Derry is Donal McKeown, who had been Auxiliary Bishop of Down and Connor since 2001. He succeeds Bishop Séamus Hegarty who retired in Novembe 2011 for health reasons.

Since then the diocese had been run by apostolic administrator Msgr Eamon Martin, until his appointment as Coadjutor Archbishop of Armagh last April, and Fr Francis Bradley.

Derry diocese is one of the largest on the island of Ireland with around 245,000 Catholics in 51 parishes and 104 diocesan priests

Bishop McKeown (63) is from Randalstown, Co Antrim, where he was born in April 1950, the first of four children. His late father James was a watchmaker and his late mother Rose a primary school teacher.

As a young man Bishop McKeown played both hurling and football with the local Creggan Kickhams GAA club.

After primary school he attended St Mac Nissi’s College (now St Killian’s College) at Garron Tower near Carnlough on the Antrim coast before attending Queen’s University Belfast from where he graduated in German and Italian in 1973.

While atttending Queen’s he stayed at St Malachy’s diocesan seminary in the city. Afterwards he spent five years at the Gregorian university in Rome, where he studied theology and philosophy before ordination for Down and Connor diocese in July 1977.

He was appointed to the teaching staff of St Patrick’s College in East Belfast and, in 1983, to his alma mater St MacNissi’s College.

In 1987 he was appointed to St Malachy’s in Belfast, becoming its president in 1994 until his appointment in 2001 as Auxiliary Bishop of Down and Connor.

Fluent in Irish, Italian, and German he has been a regular contributor to media, north and south of the Border. A sports enthusiast all his life he has completed two Belfast marathons.

In his words to the people of Derry this mornng Bishop McKeown said: “We all know that things in life can change very quickly. Man proposes but God disposes.

“ It is only six days since my work in Belfast was interrupted by an invitation to go to Dublin to meet the Apostolic Nuncio that afternoon. Archbishop Brown’s words still ring in my ears : ‘The Holy Father has chosen you to be Bishop of Derry’. They sound so disarmingly simple!”

He knew that many people across the diocese had “suffered hard times”. The Troubles scarred many lives and we know from the Inquiry into Historical Institutional Abuse that many people have terrible memories of their upbringing.

Dungiven had recently suffered the loss of many jobs at KPL – just as the area no longer had its long tradition of shirt making, he said.

“But Pope Francis has given us all huge encouragement to be people of faith in the realities of our time and environment.”

He recalled how when he googled the name St Eugene, after whom Derry’s Catholic cathedral is named, he saw that his name in Irish was Eoghan.

“ In Irish, my own surname is MacEoghain – and part of Tír Eoghain lies in this diocese, as well as Inis Eoghain. Ag tús ár dturas le chéile guímis trí idir-ghuí ár naomh áitiúla – Colm, fear na síochána agus Eoghan fear na bpaidreacha doimhne. And I pray that I may be able to become a MacEoghain, idir anam agus corp in the service of the people of God in this diocese.”