Muslim leaders disagree over usefulness of protest against IS 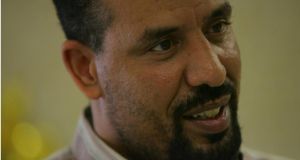 Dr Ali Selim: said many Muslims in Ireland “were not aware of the demonstration”, which had “come out of the blue”. Photograph: Bryan O’Brien

The absence of a representative from the Clonskeagh mosque at the “Not in Our Name” Muslim protest against Islamic State in Dublin on Sunday was due to lack of consultation, a spokesman has said.

It is understood the absence of representatives from the Islamic Foundation of Ireland in Dublin was for similar reasons. The event, organised by the Irish Muslim Peace & Integration Council, was the first such protest in Ireland.

Dr Ali Selim of the Clonskeagh mosque, who returned to Ireland yesterday from a trip abroad, said many Muslims in Ireland “were not aware of the demonstration”, which had “come out of the blue.”

Dr Selim said that had organisers come to him, he would have said he did not think a protest was the proper way to approach the matter.

He asked who was the protest targeting. “Was it targeting Muslims? They should already be aware of the damage caused by IS, which has killed so many more Muslims than non-Muslims.”

He believed what was happening in mosques in Ireland every Friday, where the actions of IS are “condemned and clarified as anti-Islamic”, was the best way to combat any influence IS might have among young Muslims here.

Dr Selim said IS had no religious authority. “They have been discredited by Muslim scholars worldwide.”

He said the media contributes to the success of the group by calling them Islamic State. This so-called Islamic State, where is it?” he asked.