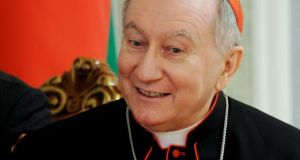 When the Vatican Secretary of State, Cardinal Pietro Parolin, called the result of last weekend’s referendum a “defeat for humanity”, were we looking at yet another classic moment when the Vatican manifestly “doesn’t get it”? Let us put this into a recent historical context.

In March 2002, with the US clerical sex abuse crisis at its height, the Vatican held a press conference during which the then prefect of the congregation for the clergy, Colombian Dario Castrillon Hoyos, dealt with the sex abuse issue. Faced with a barrage of questions, many of them from US and UK reporters, Cardinal Hoyos delivered a now infamous statement in which he pointed out that most of the questions had been asked in English, adding: “That in itself is an x-ray of the problem”

The very clear implication was that this paedophile priest issue/thing was an Anglo-Saxon obsession, propagated both by the enemies of the Church and greedy lawyers. There and then, many of us concluded that if a Cardinal Head of Dicastery can say this, then clearly a large part of the Holy See just does not “get it”.

Cardinal Parolin’s remark is equally revealing. Clearly, and from his point of view correctly, he is defending Church doctrine which teaches that marriage is a sacrament between a man and a woman. What is staggering is the terminology. “Defeat for humanity” is a term perhaps better applied to the Jewish Holocaust or to the emergence of IS rather than to the result of an Irish same sex marriage referendum.

After all, this is the Pontificate of a certain Francis, a Pope who has used unprecedentedly inclusive language about homosexuals, saying:

“A gay person who is seeking God, who is of good will – well, who am I to judge him?”

That famous remark on the plane back from Brazil in the summer of 2013 does not of course change the Catholic rejection of same sex marriage nor Catholic teaching that the practise of homosexuality is a sin. However, those remarks did indicate a radical change of tone, a welcome for gays, a tone that was reflected, briefly, during last October’s Synod which at the halfway point had spoken of “the gifts and qualities” that homosexuals “can offer to the Christian community”. This was hardly going down the “defeat for humanity” road.

In the Holy See this week, some Vatican officials, off the record, regretted Cardinal Parolin’s “tone” if not his “content”.

At least one argued that the time has come for the Catholic Church to completely rethink its “position” on homosexuality. Could the “defeat for humanity” remark lead to a “success for inter-cultural dialogue”?