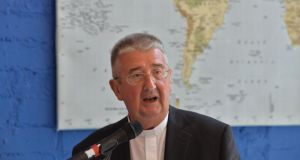 The level of homelessness in Dublin has been described as “shameful” by Catholic Archbishop Diarmuid Martin.

“We need strong vision, less spinning,” he said this morning. “Homelessness is a sort of thermometer of the overall social climate. If that is the case, the current crisis of homelessness in Ireland is in fact an indication of a more widespread failure of social policy,”the Archbishop of Dublin said.

Calling for “greater policy coherence”, he said: “We live in a very challenging social climate in Ireland. The level of homelessness in what is a wealthy Dublin is shameful. The level of precariousness regarding accommodation, especially for families, is worrying,” he said.

Archbishop Martin was speaking at the launch of a first annual report from the information and advocacy services of Crosscare, an agency of the archdiocese, at its centre on Sackville Place in Dublin.

“We face one of the paradoxes of many developed societies: we have increased homelessness and we have unoccupied housing; we have people hungry and enormous quantities of food are thrown away daily,” he said.

He believed “that from today onwards the overriding challenge of government in this country must be to address in a broad perspective the social consequences of Ireland’s economic policy and to identify measures to redress the disadvantage which the vulnerable have suffered.”

He was also critical of how some social services interact with people.

“In today’s Ireland many men and women who may have been managing to make ends-meet now find themselves in situations of great precariousness and through a combination of insecurity and shame at their predicament find the environment of social assistance centres off-putting and alien and unfriendly,” he said.

“For immigrants the whole world of our services can feel alien and hostile. Social services of any kind, voluntary, statutory or charitable, which leave people humiliated, have failed in their task.”

He felt it “important to note how Crosscare is not afraid to point out failures in the way in which public services respond to the needs of those who turn to them and to look closely the reasons why such services fail to respond at times even to legal entitlements.”

But he noted that the overall tone of the Crosscare report “is one which looks towards cooperation and working together....Cooperation is vital in the future and social reform in Ireland can only be the result of fruitful partnership between government and civil society.”

Speaking to the media later he said “our asylum services have to be speeded up. People have a right to asylum and you shouldn’t need seven years to be able to know whether your right is being accepted and worked out. The system is very slow and it’s very unfair, particularly to children.”

He pointed out that, where asylum processes were concerned, Ireland had “a legal obligation to ensure they work more efficiently....if you keep people in institutions for a length of time you institutionalise them and we all know that institutionalised people never function properly again. It damages them.”

It was also the case that “the granting of asylum doesn’t mean someone is already integrated. The task then begins.”

He wondered “maybe it’s time to sit down together, all those who are involved, and chart out a new way of addressing these problems.” As for the Church he said it had “provided land for housing. Sometimes people say the church has empty buildings but most of them are unfortunately unsuited, except for emergency accommodation, because of health and safety standards.”

Archbishop Martin also said he hadn’t spoken to Irish abuse survivors Marie Kane and Mark Vincent Healy since they met Pope Francis on July 7th last since they returned to Ireland. He was himself abroad until last weekend.

“I haven’t spoken to either of them since they came back. I think, certainly the amount of time the Pope dedicated to them was quite extraordinary and from what I’ve seen from the media both of them will say very clearly they felt they were listened to.”

He continued “we’ll see now how the work on the papal Commission (for the Protection of Minors) develops. It’s at very early stages but certainly the idea of receiving and listening to precisely what those two survivors wanted to say..maybe some of the things they said didn’t please everyone..but we respect the experience that they have precisely because that’s what they have.”

Where Australia’s Royal Commission into Institutional Responses to Child Sexual Abuse and the Vatican was concerned, he said there was “a different level of co-operation going on there” compared to that which the Murphy Commission received from Rome.

“There maybe some difficulty about the manner in which some documents are attained but I think there will be more co-operation. The Royal Commission in Australia is very different. It holds public sessions which of course the Murphy Commission didn’t,” he said.