Hundreds of thousands converge on Vatican 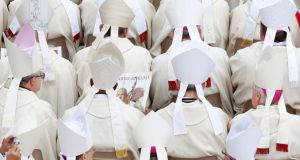 Bishops read the Vatican newspaper L’Osservatore Romano as they wait for the canonisation ceremony in St Peter’s Square at the Vatican. Photograph: Max Rossi/Reuters 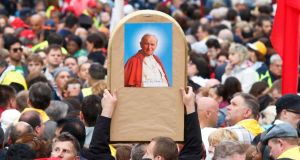 A man raises an image of Pope John Paul II through the crowds waiting to attend the canonisation ceremony of Popes John XXIII and John Paul II in St Peter’s Square at the Vatican. Photograph: Remo Casilli/Reuters 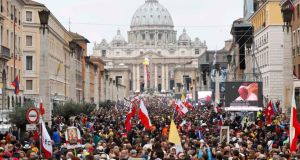 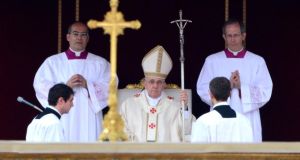 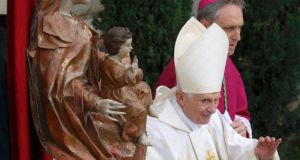 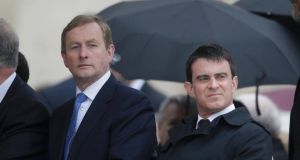 Hundreds of thousands of people from around the world had converged on the Vatican to attend the sainthood ceremony of two giants of the Catholic Church in the 20th century. An estimated 3,000 Irish pilgrims are in Rome for the canonisations.

“We declare and define Blessed John XXIII and John Paul II be saints and we enrol them among the saints, decreeing that they are to be venerated as such by the whole Church,” Pope Francis said in his Mass.

In a homily, he described Saints John XXIII and John Paul II as “priests, bishops and popes of the 20th century. They lived through the tragic events of that century, but they were not overwhelmed by them. For them God was more powerful, faith was more powerful”.

Francis said the two popes had “co-operated with the Holy Spirit in renewing and updating” the Catholic Church.

“In convening the (Second Vatican) Council, John XXIII showed an exquisite openness to the Holy Spirit. He let himself be led and he was for the church a pastor, a servant-leader. This was his great service to the church, he was the pope of openness to the spirit,” said the Pope.

He described John Paul II as “the pope of the family” who is guiding the church on a journey towards the Synod on the family later this year and into next year. “It is surely a journey which, from his place in heaven, he guides and sustains,” he said.

“May these two saints and shepherds of God’s people intercede for the church, so that during our two year journey toward the synod she may be open to the Holy Spirit in pastoral service to the family.”

Among those attending this morning’s Mass was Pope Emeritus, Benedict XVI, who received a warm round of applause from the assembled crowds as he took his seat before the ceremony. Benedict last year became the first pope to resign in 600 years and now lives in secluded retirement.

Sitting to the left of the sanctuary, he concelebrated the Mass along with 150 cardinals and 750 bishops. They included Ireland’s Catholic primate Cardinal Sean Brady, the former Archbishop of Dublin Cardinal Desmond Connell, the Bishop of Limerick Brendan Leahy and the Bishop of Killaloe Kieran O’Reilly, who led 53 pilgrims from that diocese to Rome for the event.

Among the 19 heads of state and 25 heads of government present, as well as official delegations from 90 states , was Taoiseach Enda Kenny.

Other leaders included the president of Poland Ewa Kopacz, as well as two former Polish presidents, Lech Walesa and Aleksander Kwasniewski. Hundreds of thousands of their fellow countrymen and women were among the vast crowds in St Peter’s Square, along the Via della Conciliazione and watching on huge screens elsewhere in Rome.

St Peter’s Basilica will be open until tonight to allow pilgrims visit the tombs of both new saints, which rest in crypts inside the building.

Tomorrow morning, a Mass of thanksgiving for the canonisations will be said in St Peter’s Square.

At 4pm tomorrow, Cardinal Brady, Bishop Leahy and Bishop O’Reilly will concelebrate a Mass of thanksgiving for Irish pilgrims at the Church of St Maria in Navicella in Rome.

Tonight, RTÉ will broadcast a special edition of Beyond Belief at 10.30pm on RTÉ One TV in which presenter Mick Peelo will remind viewers of the lives of John Paul II and John XXIII. Among participants will be the Bishop of Killala John Fleming, the former vice rector and rector of the Irish College in Rome.

The fact that the two new saints are widely seen as representing contrasting faces of the church added to the significance of an event Francis hopes will draw the world’s 1.2 billion Catholics closer together. The election of the Argentinian-born Francis has injected fresh enthusiasm into a church beset by sexual and financial scandals during the papacy of his predecessor Benedict XVI.

John XXIII, who reigned from 1958 to 1963 and called the modernising Second Vatican Council, and John Paul II, the Pole who reigned for nearly 27 years, played a leading role on the world stage.

Francis’ own huge popularity has added extra appeal to the unprecedented ceremony to raise two former leaders of the church to sainthood on the same day. But while both were widely revered, there has also been criticism that John Paul II, who only died nine years ago, has been canonised too quickly.

Groups representing victims of sexual abuse by Catholic priests also say he did not do enough to root out a scandal that emerged towards the end of his pontificate and which has hung over the church ever since.

John XXIII, an Italian often known as the “Good Pope” because of his friendly, open personality, died before the Second Vatican Council ended its work in 1965 but his initiative set off one of the greatest upheavals in church teaching in modern times.

The council ended the use of Latin at Mass, brought in the use of modern music and opened the way for challenges to Vatican authority, which alienated some traditionalists.

John Paul was widely credited with helping to bring down communist rule in eastern Europe and hastening the end of the Cold War. He continued many of the reforms but tightened central control, condemned theological renegades and preached a stricter line on social issues such as sexual freedom.

A charismatic, dominant pope, he was criticised by some as a rigid conservative but the adoration he inspired was shown by the huge crowds whose chants of “santo subito!” (make him a saint at once!) at his funeral 2005 were answered with the fastest declaration of sainthood in modern history.

Last night the US-based Survivors Network of Those abused by Priests (SNAP) staged a candle-lit vigil on the rooftop of a hotel near the Vatican in protest at the canonisation of John Paul II, which they have described as “irresponsible and hurtful”.

The group said he “must have known” about the multiple sexual abuse allegations against Legionaries of Christ founder Fr Marcial Maciel Degollado.

“Instead of disciplining or defrocking Fr Maciel, Pope John Paul II held a highly publicised special ceremony celebrating the anniversary of Maciel’s ordination,” they said in a statement.

Holding candles, signs and childhood photos, the clergy sex abuse victims stood in theirl rooftop vigil with St Peter’s Basilica in the background. They also read aloud an open letter - in French, German, Spanish and English - to victims, witnesses, and whistleblowers, urging them to keep speaking up and reporting crimes, “even though complicit Catholic officials - including Pope John Paul II - keep getting honoured and promoted”.

They called for “every single incident or suspicion of clergy sex crimes and cover ups” to be reported to “secular officials, not church officials” to “boldly but compassionately keep reaching out and offering help to every single person who they know of or fear was sexually assaulted by clergy”.

They also made special reference to the “dozens of victims of the world’s most notorious predator priest – Fr Marcial Maciel – whose extensive crimes and misdeeds were ignored and hidden during Pope John Paul’s long papacy”.

Both canonisations have involved some adaptation of the normally strict rules governing declaration of a saint, which involve a close examination of each candidate’s life and works and normally the attestation of at least two miracles.

Benedict waived a rule that normally requires a five-year waiting period before the preliminaries to sainthood can even begin to speed up John Paul’s canonisation, while Francis ruled that only one miracle was needed to declare John a saint.