Dr Khaled Alotaibi says he has worked with US on deradicalisation 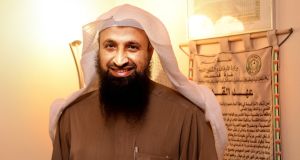 An Islamic scholar who is visiting Dublin, and has been described as extremist by two leading Irish Muslims, has said he “always encourages young people not to go fighting and I call on youth not to participate in violence”.

Speaking through an interpreter to The Irish Times before Friday prayers at the Dublin Mosque, on the city’s South Circular Road, Dr Khaled Alotaibi pointed out that he had worked in co-operation with the US and UK governments on deradicalisation programmes.

If his views were problematic, he asked, “why am I in charge of a programme at Guantánamo. Why do the US and UK governments’ trust me?”

He was “totally opposed” to Islamic State, al-Qaeda and Hizbullah, and against what they represented, he said.

Dr Alotaibi will take part in the Dublin Islamic Conference 2016 at the mosque today where he will speak on The Unseen World.

His fellow Kuwaiti scholar, Dr Othman Khamees, was scheduled to take part in the conference also but had to withdraw for personal reasons.

News that both Sunni clerics were to take part in today’s conference was condemned by Dr Ali al-Saleh, imam at the Dublin Shia mosque in Milltown, and Dr Umar al-Qadri, imam at the  mosque in west Dublin’s Blanchardstown.

Two weeks ago, Dr al-Saleh raised concerns about the impending visit of the two clerics with the Garda, saying he was concerned they could influence young Muslims living in Ireland.

Dr al-Qadri said that both Kuwaiti clerics, while not well-known globally, preached a sectarian form of Islam, Wahhabism, which was intolerant of other religions such as Christianity and Judaism as well as of other Muslims such as Shia or Sufi Sunnis.

Dr Alotaibi said this was “not accurate at all” and that what both Irish-based Muslim leaders were doing was “attributing to me their own qualities of intolerance.

He and Dr Khamees were “totally anti-radicalisation, totally against violence”, he said.

He is associate professor of Islamic studies at the College of Basic Education in Kuwait University and serves on various committees of Kuwait’s ministry for Islamic affairs.

He is a graduate of Imam Muhammad bin Saud University in Saudi Arabia.

Today’s conference in Dublin was organised by the Irish Kuwaiti student organisation Thabat and the Islamic Foundation of Ireland.

Of the approximately 600 Kuwaiti students in Ireland, 350 attend the Royal College of Surgeons (RCSI) in Dublin.

A spokeswoman for the college said its policy on external speakers did not extend to non-RCSI events such as today’s.