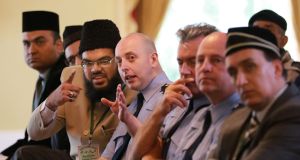 Ireland is working towards “more integration, more involvement, and more dialogue” where its Muslim community and other ethnic minorities are concerned, said Minister for Equality, Immigration and Integration David Stanton.

“We’re having discussions with all communities, with various Government and State agencies with respect to formulating an integration strategy. We want this to be a living, breathing process, not just a document. We want something that’s going to work,” he said.

Ireland was also co-operating “with all other countries in respect to any threats or dangers”, he said. Sharing of information “is very important and obviously there are safeguards there for privacy purposes”.

It was also important “in ensuring that where there are concerns, such concerns can be identified at an early juncture and action taken where appropriate to ensure that the community as a whole is protected”.

His intention was to publish a migration strategy in the autumn.

Assistant Garda Commissioner Michael O’Sullivan thanked the Ahmadiyya Muslim community in Ireland for helping the force in its work. “The demographic changes that have taken place in Ireland in such a short period of time have been incredible. I have to say they have really put An Garda Síochána, as the national police force, to the test.

“I want to stress that you here today and your community leaders have really helped us pass that test, a test that evaluates An Garda Síochána and its ability to provide a national police service to all minorities without discrimination.

“So many country’s police forces fail to engage with communities, with minority communities which have an adverse effect on both communities and on the whole policing structure of the country.”

He was “aware of the acute suffering of all Muslims, not just in Ireland but worldwide who are afflicted with fear due to the collateral damage and fallout from terrorist atrocities supposedly carried out in their name. Every police officer in Ireland understands that it’s not true and are well-aware that our Muslim sects here are peaceful, respectful and law-abiding.”

He said, “we’ve very good relations with the Muslim community, with all sects and we are not concerned about particular individuals”. However, he warned against complacency. There were “many liaison gardaí working with the communities”, among them speakers of Arabic. He also felt “the media have a responsible role to play in it as well”.

1 Donald Trump is in trouble, and that could spell very bad news
2 House parties are being held ‘with abandon’, Holohan warns
3 O’Doherty and Waters ordered to pay legal costs of case against State over Covid-19 laws
4 Some larger stores to reopen on Monday ahead of schedule
5 Taoiseach says €350 pandemic payment to be cut for some part-time workers
Real news has value SUBSCRIBE