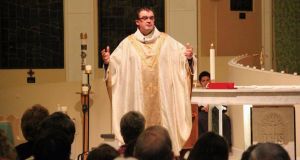 Strabane-born Fr John Gallagher began canon law proceedings last summer against the Florida diocese after he was disciplined for raising questions about the Indian priest’s conduct.

The case by the Irish priest against Bishop Gerald Barbarito now rests with the Vatican’s new tribunal of accountability, set up to investigate the actions of bishops when faced with child abuse allegations.

Fr Jose Palimattom, who began working in Palm Beach in late 2014, admitted showing obscene images to a minor there on January 4th 2015. He subsequently pleaded guilty, served a sentence, and was deported to India.

According to police reports of the case seen by The Irish Times, investigating officers were told by three people that Fr Palimattom admitted he abused a minor in India prior to his arrival in the US, and said church authorities in India were aware of this.

“When (Fr) Gallagher asked Palimattom if he had ever had sex with a male, he advised yes. When asked if the male was a minor, Palimattom said yes and that it was in his culture.”

Police reports said the witnesses agreed when “Palimattom was asked if the diocese in India was aware of his indiscretions with a male, he said yes. When asked how the incident was resolved, Palimattom advised he was told to go to confession and make a retreat and that all would be okay.”

In a statement Palm Beach diocese said that prior to Fr Palimattom’s arrival “receipt of a certificate of aptitude from the minister provincial in India . . . assured us that there is nothing in his past that would indicate that he might deal with minors or adults in an inappropriate manner. . . no prior misconduct was revealed.”

“And nothing of this sort of behaviour was manifested or reported to the authorities here in the province. There was no occasion where the authorities have reprimanded Fr Jose Palimattom concerning this subject.”

The case has been brought to the attention of Archbishop of Boston Cardinal Seán O’Malley, himself a Franciscan, chair of Rome’s new Commission for the Protection of Minors.

Cardinal O’Malley served as Bishop of Palm Beach from 2002 to 2003. His three immediate predecessors in Palm Beach included two bishops who resigned on admissions that they had sexually abused minors. Bishop Keith Symons did so in 1998, and Bishop Anthony O’Connell in 2002.

A third predecessor there was Bishop Thomas Daily, Bishop of Palm Beach prior to Bishop Symon. He had been auxiliary bishop and chancellor in Boston archdiocese to 1984. In 2002 he expressed “profound regret” when named as defendant in 56 of 84 cases filed by people claiming abuse by America’s most notorious clerical paedophile Fr John Geoghan in Boston over three decades.