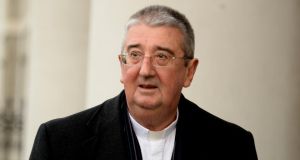 Archbishop of Dublin Diarmuid Martin told the church’s newest appointees that being a priest “is not easy”. File photograph: Cyril Byrne/The Irish Times

A former barman was among two priests ordained for the Archdiocese of Dublin in a ceremony at St Mary’s Pro-Cathedral on Wednesday.

Chris Derwin (32) had previously worked at Madigan’s and Grace’s pubs in Dublin, as well as popular nightspot Tramco before enrolling in the seminary at St Patrick’s College in Maynooth in 2008.

From Milltown and Rathmines in Dublin, he will be the youngest priest in the Archdiocese of Dublin.

Following graduation he worked for a number of years and was in his 30s before he began to explore a vocation to the priesthood.

He took time out from his career to study in the Emmanuel School of Mission in Rome, living in the community and working on parish missions. He entered Maynooth in 2009.

Speaking at their ordination, Archbishop of Dublin Diarmuid Martin told the church’s newest appointees that being a priest “is not easy”.

He said feelings of anxiety, cynicism or resignation may occur, but added that their ministry also has the capacity to bring them “deep contentment”.

The ceremony was held to mark the feast of St Kevin, the patron saint of the Archdiocese of Dublin.

Speaking last year, the archbishop said two Catholic priests in Dublin were aged under 40 years, compared with 44 in the 70-75 age bracket.