Reading of the fallen takes place at Unitarian Church 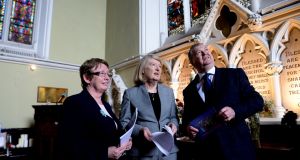 A reading of the names of all the dead of Easter Week 1916 took place at Dublin’s Unitarian Church on Friday, including 40 children under 17.

Broadcaster Joe Duffy, who took part in the ceremony, said how it had taken “less than a minute to read out the names of the 40 children in there today. It took us 100 years to get here.” It was a week when “ Dublin was the most dangerous place in the world for children”, he said.

Author of the book Children of the Rising, he found it amazing that “we still don’t know, 100 years later, the number of people killed in the rebellion”. Figures varied between 488 and 550, he said. “There were no inquests for the vast majority of people. They were buried quickly. The majority of civilians are buried in unmarked graves.”

Of the dead, about 70 were rebels, 116 British soldiers, some 30 were police but killed, “about 55 per cent are civilians” he said. An area of the city “between the Aviva and Croke Park, Heuston station and Samuel Beckett bridge, was the cauldron that week”.

It was where three-quarters of Dublin’s then 300,000 population lived.

“They saw men lying on the street. They didn’t care what uniform they were wearing. They grabbed a bucket of water from the canal and went out to a wounded person. Three were killed in cross-fire that way, Lionel Sweny (13), Christopher Andrews (14), and we believe John Kirwan (15) might have died in the same way.”

There were, he said, incredible acts of heroism among the civilians. He recounted the story of Margaret Naylor from Ringsend, whose husband was on the Western Front where he had already lost two brothers.

“She’s on her own with three children on the Saturday of Easter Week when the city was starving.” Naylor went in search of food for her children and was caught in cross-fire.

A priest crawled to her, gave her the last rites, believing she was dead. “She lay on that bridge for six hours before it was safe to retrieve her.” It was discovered she was still alive, but she died three days later in hospital. “And then she disappears off the face of the earth. It took the family 98 years to find that woman’s grave.”

It was in Grangegorman cemetery.

“On the same day that woman died her husband was killed on the Western Front. Three children orphaned,” said Duffy. There is, he said, “a whole tome of untold stories about the civilians” who died in Easter Week 1916.