Exhibition on priests who ministered during Easter Rising 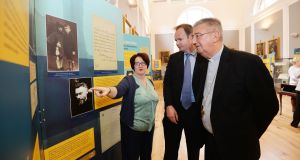 A new exhibition is opening in Dublin to commemorate priests and nuns who risked their lives to attend to the dead and dying, the injured and the hungry during the 1916 Rising.

St Kevin’s Oratory in the Pro-Cathedral on Marlborough Street has been refurbished to host the exhibition, which includes artefacts and handwritten letters from rebel leaders of the Rising as well as an interactive digital display of documents from diocesan records.

It was opened by Minister for Education Richard Bruton last night.

Included is correspondence between then archbishop of Dublin William Walsh and authorities during and after the Rising as well as letters received from Joseph Mary Plunkett, Patrick Pearse’s last letter to his mother, and correspondence around a petition to save Roger Casement from execution.

The exhibition “gives a glimpse into a dimension of 1916 which could easily be overlooked,” said Archbishop Diarmuid Martin of Dublin.

It was “a tribute to the Dublin priests” of the parish “who did what they had to do, and stayed”, he said.

One priest, a Fr Flanagan, “was in the GPO for the entire week. They thought he was dead”.

Dr Martin said it was not known what the political allegiances of these people were. “They went about what they did everyday in circumstances which suddenly changed and became completely different.”

One of the things he found striking was the audio of Fr Michael Curran’s description of O’Connell Street immediately after the surrender. Secretary to Archbishop Walsh, Fr Curran had found himself on the street “almost alone. The place was completely destroyed”.

Dr Martin said the exhibition was taking place in the Pro-Cathedral because “it was the only building left standing as it was then. It wasn’t burned down because the wind changed”.

Diocesan archivist Noelle Dowling said “it’s the first time we’ve ever done anything on this scale”.

The exhibition is free and will be open daily from today until the end of this year.