Archbishop Diarmuid Martin ‘strongly commended’ for leadership in the area 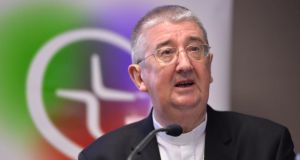 Dublin’s Catholic archdiocese has received a glowing report following a review of its child safeguarding practices by the Church’s child protection watchdog.

The review by the National Board for Safeguarding Children (NBSC) took place over four days, from January 28th to 31st last, and involved 125 person-hours on site involving four reviewers, due to “the size of the Child Safeguarding project in the Archdiocese of Dublin. ”

It was published at noon on the Dublindiocese.ie website and is one of nine such reviews due out today.

In its conclusion of the Dublin archdiocese review, the NBSC said Archbishop Diarmuid Martin should be “strongly commended for the leadership and commitment that he has given to the whole child safeguarding project in the Archdiocese of Dublin. His work is well evidenced in all aspects of child safeguarding that was elicited in the course of this review.”

It said “the reviewers are very impressed by the extent to which the archdiocese of Dublin has taken on its moral responsibilities to monitor, supervise and support priests and former priests who have abused children.”

It noted that “Archbishop Martin has developed the practice of meeting the victims of abuse by priests of the archdiocese. These meetings are extremely well prepared for, which is evidence of great care being taken to ensure that they are not simply procedural in nature and atmosphere......Overall, the evidence is that the support work in the Archdiocese of Dublin is very victim focused.”

The Garda vetting system in place in the archdiocese was “very impressive” and the reviewers were also impressed by “the strong sense of team” among child protection staff in Dublin and “by the tangible commitment by every member to child safeguarding.” It was clear “that safeguarding activities have been prioritised alongside support to complainants and management of respondent priests,” it said.

It felt Dublin was to be “ commended for the rational, comprehensive and integrated child safeguarding system that it has developed.”

Significantly it drew attention to an observation in the Murphy report that effective child protection procedures in the archdiocese seemed “heavily dependent on the commitment and effectiveness of two people - the Archbishop and the Director of the Child Protection Service.” Murphy continued “the current Archbishop and Director are clearly committed and effective but institutional structures need to be sufficiently embedded to ensure that they survive uncommitted or ineffective personnel.”

Today’s NBSC review concluded “that the child safeguarding structures developed in the Archdiocese of Dublin are now sufficiently rooted and robust to survive the movement of personnel from their current positions in the archdiocese.” It continued that “this rational and effective system has inbuilt accountabilities, both internally and to the statutory child protection agencies” and to the NBSC, “which should ensure that any ‘uncommitted or ineffective’ post-holder would be easily identified and strongly challenged.”

The review examined files relating to 40 priests against whom concerns had been raised in the archdiocese since May 1st 2004, the cut-off point for the Murphy Commission investigation. Four of the priests concerned had been convicted in the courts in relation to child sex abuse. All are out of ministry. In all 10 of the 40 had been laicised or dismissed from ministry.

The review found that the archdiocese “has acted to significantly restrict or terminate the ministries of 27 of the 40 priests in this cohort about whom there have been child safeguarding concerns that have been credible or proven.”

It referred to the jailing last March of Fr Denis Nolan to seven years for his ongoing sexual abuse of a child at Rethnew Co Wicklow between 2007 and 2011 as a case “which highlights that vigorous child safeguarding continues to be essential and that the Catholic Church in Ireland needs to remain vigilant in this regard.”

Costs, to date, to the archdiocese of settlement of claims regarding child sexual abuse by priests is €20.4 million currently, €14 million in settlements and €6.4 million in legal costs for both sides.

1 Covid-19: Cases increasingly occurring among young people, officials say
2 Mother and five children sleeping in car while seeking accommodation
3 Abuse victim of former school principal had no idea other boys were being attacked
4 Couple challenge revocation of rates exemption for D4 property
5 Depp may have severed own finger, according to email to doctor, court told
Real news has value SUBSCRIBE