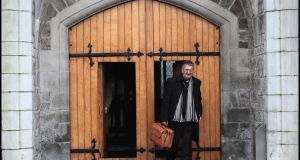 Archbishop of Dublin Diarmuid Martin: would like to see seminarians living in a smaller community from where they could be assigned to parishes in Dublin. Photograph: Brenda Fitzsimons

Archbishop of Dublin Diarmuid Martin has said he would favour the establishment of a new seminary in Dublin for the formation of priests.

Speaking after he decided to stop sending seminarians from the Dublin Archdiocese to St Patrick’s College in Maynooth amid anonymous allegations of a gay subculture there, Dr Martin said he had been looking at a site for a new seminary but it was not yet ready.

Dr Martin told The Irish Times he believed the climate in Maynooth was not that of a “serene and tranquil setting suitable for ordinary students” .

Regarding the allegations about Maynooth, he said he had “a very strong view on anonymity”.

“The grapevine is infallible but you may not always be able to substantiate it,” he said, adding that he had “ very little respect for those who don’t stand by their allegations in public”.

He also emphasised that his comments about seminarians using the gay dating smartphone app Grindr applied to all dating apps, gay or heterosexual. They were “instruments for promiscuous sex, for casual sex, which is not on for seminarians”, he said.

He said he would like to see seminarians living in a smaller community from where they could be assigned to parishes in Dublin, “linked to a particular parish while continuing their studies”.

Such formation would be “less institutional, less comfortable, more realistic than you can do in Maynooth”, he said.

However, if agreement could be reached between Maynooth, Milltown and the Loyola Institute at Trinity College in Dublin, it might not be necessary for the seminarians to leave the city to study theology, he said.

Dr Martin remarked on the “amazing sensitivity” of reactions to his decision to send three seminarians to the Irish College in Rome.

He had informed his fellow trustee bishops at Maynooth about this “way back”, but that it had taken “2½ months” to emerge.

As of last night, the other 25 Catholic dioceses in Ireland said their bishops would continue sending seminarians to Maynooth, with some also going to the Irish College in Rome.