Article could cause an ‘embarrassment to atheists, agnostics and humanists’ 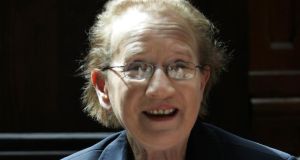 Six of the President’s seven nominees to the Council of State have made a submission to the Convention on the Constitution asking that it consider the appropriateness of office-holders having to take religious oaths, including former Supreme Court judge Catherine McGuinness. Photograph: Eric Luke

Six of the President’s seven nominees to the Council of State have made a submission to the Convention on the Constitution asking that it consider the appropriateness of office-holders having to take religious oaths.

They point out that article 31.4 of the Constitution reads: “In the presence of Almighty God I . . . do solemnly and sincerely promise and declare that I will faithfully and conscientiously fulfil my duties as a member of the Council of State.”

In their submission, the six say: “The respect due to religion and to those who profess religion is of course sacrosanct. But to require a citizen to publicly profess a faith – any faith – as a precondition to enter and hold public office serves neither religion nor the ideal of a public space open to all who are willing to contribute to the common good in a Republic.”

The six said: “This issue came to our attention recently at the first meeting of the Council of State called by President Higgins (July 29th, 2013). Our core concern is the reference to religious beliefs in the relevant oaths and declarations as a pre-requisite to taking public office.”

They were approaching the issue “from the perspective of what it means to take seriously the Republican form of Government . . . We are also conscious of the increasing diversity of our society today compared with society at the time the Constitution was adopted”.

Declarations
The requirements of article 31.4 “could exclude or cause embarrassment to atheists, agnostics and humanists. It could also be unacceptable to Quakers and other Christians who do not approve of religious oaths, and to members of some other non-Christian faiths”, they said.

They further noted that “the Constitution requires similar declarations to be made by the President him or herself and all members of the judiciary” and that this too should be considered by the convention. The courts “already allow witnesses and members of juries to choose between taking a religious oath, under various forms, and making an affirmation with no religious references”, they said.

The Council of State, which offers advice to the President when asked, comprises the appointed members, and senior office holders, including the Taoiseach and Chief Justice, as well as former such office holders and former presidents.

Welcoming the submission, Atheist Ireland recalled how at the Council of State’s meeting last July, “Tánaiste Eamon Gilmore had to swear the religious oath, despite being publicly on record as saying that he does not believe in God. He said that he had taken legal advice, and that he had a constitutional obligation to swear the oath.”