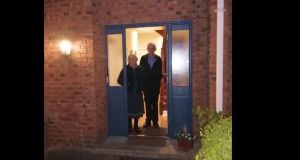 A retired Church of Ireland archbishop has described himself and his wife as “extremely annoyed that we older people have been deceived and misled in the midst of” the current Covid-19 crisis.

His comments follow clarification by the Department of Health in recent days that cocooning by the over-70s was “advisory” and not mandatory amid the pandemic. A department spokeswoman added that the over-70s were, however, subject to the same laws about non-essential travel as everybody else during the Covid-19 crisis.

There are no provisions in the Health (Preservation and Protection and other Emergency Measures in the Public Interest) Act, 2020, introduced as part of the State’s effort to tackle the pandemic, to sanction those the HSE believes ought to be cocooning to protect themselves from the virus but are not.

The Act allows gardaí to fine or imprison those who do not obey orders for people not to make unnecessary journeys outside a 2km zone surrounding their home amid the pandemic.

Cocooning instructions for the over-70s were issued by the HSE on March 28th. They also apply to people who are organ transplant recipients, cancer patients, or those who have a serious respiratory condition such as cystic fibrosis, asthma or chronic obstructive pulmonary disease (COPD).

Retired Church of Ireland archbishop of Dublin John Neill (74) said he and his wife Betty were “extremely annoyed” at the HSE’s later clarification that cocooning measures were not in fact mandatory,saying that there appeared “to have been a deliberate attempt to mislead in public advertising and even by the Taoiseach, the Minister for Health and the chief medical officer” on the issue.

It was “sad to see this type of high-handed behaviour at a time when we should be able to have confidence in those in charge of tackling such an important issue.

“Many of us have suffered badly mentally and physically in being put under house arrest and unable to go for a walk,” he said.

It had been made “very clear” that the right to exercise within 2km of the home “did not extend to those aged over 70”, he said.

“It was NOT pointed out that the freedoms allowed to the population at large applied equally to older people and that the exclusion of older people from such freedoms was merely advisory. It is only advisory that older people have to stay home at ALL times,” he said in a Facebook post.

The archbishop and his wife live in Kilkenny. They also featured in a separate Facebook post, by An Garda Síochána Kilkenny/Carlow, from April 4th. The Garda page wrote: “Our pedal cyclists meanwhile were on town and park patrol and got to check in on John and Betty who are Cocooning but itching to get out of the house. We’ll get through this.” The post includes photographs of the couple standing at their front door.

In a comment on that post the retired archbishop said: “We were not actually breaking out! Strictly in Cocoon.”