Family and friends advised to be extra vigilant over coming days 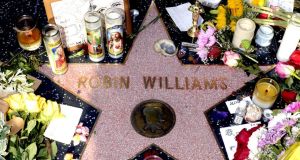 Flowers and tributes are placed at the make-shift memorial on the Hollywood Walk of Fame star for US actor Robin Williams, who was found dead of an apparent suicide in his Tiberon home north of San Francisco yesterday. Photograph: Michael Nelson/EPA

The national suicide prevention charity Console has expressed concern that the death of actor and comedian Robin Williams could provoke copycat suicides where vulnerable people are concerned and has asked that relevant family and friends be vigilant over coming days.

Paul Kelly, founder and chief exective of Console, said suicide by celebrities had in the past been followed by a marked increase in self-inflicted deaths among the wider population.

“Research has shown for instance that the deaths of such well-known people as Marilyn Monroe and Kurt Cobain were followed by a sudden rise in suicide numbers,” he said. “The fear is that it (death of Robin Williams) might trigger a contagion,” he said.

Callers to Console had been asking “what hope there could be for them now when a man like Robin Williams who had been quite open about his depression and who had such resources still ended up taking his own life,” Mr Kelly said.

Staff at the charity had been assuring such callers that “most people who suffer from depression do not take their own lives. We told them not to suffer in silence; that there is plenty of hope and help there now.”

Console’s helpline is available 24/7, at 1800 247 247, and he urged anyone who may be feeling vulnerable, and anyone concerned about someone who may be vulnerable, to get in contact . It also provides bereavement counselling to people dealing with grief following a suicide. Details at www.console.ie

Catherine Brogan, executive director Samaritans Ireland, expressing sadness at the death of Robin Williams said “there is no simple explanation for why someone chooses to die by suicide and it is rarely due to one particular factor.” Such people “may not be able to see beyond their situation and truly believe that suicide is the only option for them.”

However Samaritans “offers a safe space for people to be themselves and talk about their problems without fear of being judged. We’d like to remind anyone who has been affected by this news that we are here,” she said.

The Samaritans are available round the clock also and can be contacted by phone at 116 123 in the Republic, at 08457 909090 in Northern Ireland, or by email jo@samaritans.org.