Leaflet highlights ‘uniqueness of the role of husbands and wives’ 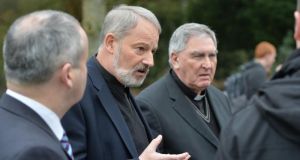 Allowing same-sex marriage would be a “grave injustice” and a disservice to society, according to members of a representative body for Catholic bishops in Ireland.

Speaking at the launch of a leaflet entitled “The Meaning of Marriage” in Maynooth, high-ranking clergy from the Irish Catholic Bishops’ Conference set out the church’s stall in the run-up to an expected referendum on same-sex marriage next spring.

“The view of marriage as being between man and a woman and for life, that’s not something which is particular to Catholics and Christians. There are people of all kinds of other religious beliefs, and of none, who believe in that,” said Bishop Liam MacDaid of Clogher, who is chair of the Irish Catholic Bishops’ Conference council for marriage.

“To put any other view of marriage on the same level as Christian marriage would be a disservice to society rather than a service,” added Bishop MacDaid, who was flanked by fellow bishop Kevin Doran of Elphin following the organisation’s two-day winter conference in St Patrick’s College.

“While there’s sort of an assumption that this referendum [passing] is a no-brainer, in some societies the legislature has legislated for same-sex marriage, but in other societies- almost everywhere there has been a same-sex referendum- it has been rejected… Our hope would be that the referendum would be defeated,” said Bishop Doran, who courted publicity last week for his concessionary stance on inheritance rights for same-sex couples.

The bishops’ remarks came upon the release of the eight-page leaflet on marriage, which contends that “it is a grave injustice if the State ignores the uniqueness of the role of husbands and wives, and the importance of mothers and fathers in our society”.

Placing a heavy emphasis on the responsibility of a functioning, heterosexual relationship in the child rearing process, the publication states that the “upbringing of children is uniquely possible” through conventional, church-endorsed marital relationships.

It goes on to say that “the union of marriage provides for the continuation of the human race and the development of human society”, and that “marriage of a woman and a man is a fundamental building block of society which makes a unique and irreplaceable contribution to the common good and to society as well”.

It is thought that today’s comments from church officials marks the opening salvo in a concerted effort to sway public opinion against same-sex marriages ahead of next year’s referendum. According to the latest Irish Times/Ipsos MRBI poll, 67 per cent of Irish people support the notion of same-sex marriage being constitutionally enshrined, with just 20 per cent of respondents opposed to such a move.