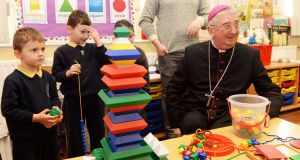 Catholic Archbishop of Dublin Diarmuid Martin with Karol Hawriluk and Sean Moore who are Junior Infants pupils at Our Lady of the Wayside National School in Bluebell, Dublin. Photograph: Eric Luke/The Irish Times.

The practice of parents and priests baptising children just so they can get access to schools is wrong, Catholic Archbishop of Dublin Diarmuid Martin has said.

The Archbishop said the church’s canon law states that people “should only be baptised if there’s a reasonable probability that they will be brought up as Catholics”.

“It is not this baptismal certificate. It’s a religious rite of entry to the life of the church and to baptise somebody for any other reason is wrong,” he said.

A recent report prepared for the Dublin Council of Priests, by consultants Towers Watson, noted how “some of the strong correlation between baptisms and birth rates” in its findings was likely due to Catholic schools admission policies.

“I do not believe that presenting baptismal certificates is an appropriate way to judge access to a school,” the Archbishop said. “It isn’t just that parents shouldn’t be presenting children to be baptised in that way but priests shouldn’t be doing it either.”

The Archbishop was speaking on a visit to the Our Lady of the Wayside national school in Dublin’s Bluebell, which has pupils from some of the most disadvanted areas in the city.

The Towers Watson report projected that weekly Mass attendance in Dublin would drop by a third over the next 15 years, while the number of priests serving in parishes was likely to fall by more than 60 per cent.

Archbishop Martin said there were three things that could be done to try to address the decline.

“One is become sceptical and just say we’re going down; one is to simply say let’s keep working the way we are and hopefully things will change; and the other is get out there and be dynamic,” he said.

Our Lady of the Wayside school principal Anne McCluskey said austerity had been “harsh on families” in the area and that it seemed economic recovery was not “bringing them any benefits, not yet at any rate”.

Conditions at the school had reached “a critical state,” she said, with “major issues of disrepair and maintainence.”

“We feel that economic inequalities are really having a detrimental effect in our school,” Ms McCluskey added.

The Archbishop said the community in Bluebell would be completely lost without a school.

“A school like this needs additional support,” he said, adding that this should be coming from the State.

“Certainly the church can help and does help, ensuring that they have the things that will enable these children to get on and that they shouldn’t be disadvantaged. The children here deserve exactly the same opportunity as the children anywhere else,” he said.

Commenting on a Newstalk/Red C poll which found that a majority of Irish people favoured legalising abortion in certain circumstances, he said “the church’s position on abortion doesn’t change.”

December sky: Jupiter and Saturn to appear closest to each other since 400 years ago 13:33
Woman threw TV off balcony injuring person walking below, court told 13:26
‘No evidence’ acting on expert report in 2016 would have helped Debenhams staff 13:22
McEntee agrees to take Dáil questions on Woulfe appointment 13:21
Settlement of €9.4m for girl (12) with paraplegia 12:42