Historians should look at religious roots of 1916 leaders’ thinking, he said 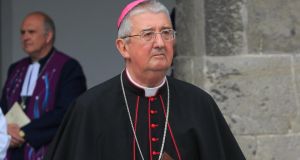 The Catholic Archbishop of Dublin Diarmuid Martin has said he regrets saying the church needed a “reality check” following the marriage equality referendum, as the phrase has since been widely misunderstood.

He was speaking at the MacGill Summer School on Beyond 2016 – What are our Aspirations for the Republic.

“The first thing that the Church must do is to carry out continuous – what I have called – ‘reality checks’. In some ways I regret that I ever used that term in a recent RTÉ interview. What I said was taken up in the press – national and international, ecclesiastical and lay – all over the world and no two stories had the same interpretation of what I intended, indeed of what I actually said.

“Perhaps I gave mixed messages. The problem is that it is reality that is mixed and there are no black and white definitions of that reality and no black and white solutions, and media are not always good at accommodating subtleties.

While the Catholic Church in Ireland would “never again be the Church that it was 20 or even 10 years ago”, things were improving, “but the moment I say that the Church has turned the corner the temptation is to think that things can now go back to where they were before.”

Indeed there were signs within the Church “that some – even young people – are seeking refuge from the challenges of life by adapting ways of the past and are retreating from dialogue with the present into the false security of imaginary better times,” he said.

In a tribute to priests he said “there is very little doubt that among the most respected categories of people in Irish society today ‘our local priest’ must be in the top five and for good reason. I am afraid that ‘the bishops’ as a group may be farther down on the popularity gauge.”

What the church needed was “ a strong laity which is not inward looking or caught up simply in Church structures and activities.”

In the context of 1916 centenary commemorations he hopes “historians will take a closer look at the religious roots of the thought of the main protagonists of the Easter Rising.

“They were men and women, not always supported by Church leaders, but who were nonetheless able to develop a remarkable social manifesto in a Republican Proclamation which emerged from leaders who were unapologetically proud of the fact their ideas were inspired ‘in the name of God.’”