Refugees to be given integration courses before being resettled around Ireland

UNHCR will declare 300 as refugees before they arrive here 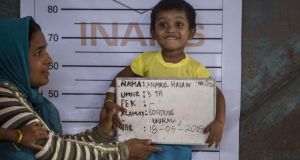 Three hundred refugees due to come to Ireland under a new EU scheme will be given integration courses in Dublin before being resettled elsewhere in the State.

Minister for Justice Frances Fitzgerald last week confirmed Ireland would resettle 300 refugees as part of an EU initiative that allocates member states a target number based on GDP, population and other criteria. Ireland was given a target of 272.

The Government will select the individuals from a list drawn up by the UN refugee agency, the UNHCR. They will be declared as refugees by the UN agency before they arrive in Ireland and will not go through the direct provision system for asylum seekers.

Rather, they will take part in a reception and integration programme that has been in use since 2000 for refugees resettled through the UNHCR. Previous groups have come from Burma, Iran, Sudan, the Democratic Republic of Congo and other states.

After taking an orientation and training course in a direct provision centre in Dublin, designed to help them integrate in Irish life, the refugees will be resettled in designated towns, where a resettlement team will assist them in the early stages. A language course is usually provided for each refugee for more than a year after arrival.

A spokesman for the Department of Justice said a decision had not yet been taken on where in the State the refugees would be resettled, or where in the world they would come from. Nor has an arrival date been decided on.

Preparations for integrating programme refugees normally begin nine months in advance, when a town is selected and the local city or county development board begins drafting an integration plan.

Ireland has also agreed to admit 114 other refugees under a Syrian humanitarian admission programme.

The department said the first batch of arrivals under the existing 2015 quota had begun to arrive.

Ireland is one of only 30 states that participate in the existing programme refugee resettlement scheme and has admitted 1,198 people from 27 countries under its terms since 2000.

The State stopped taking in programme refugees from 2008 to 2013, citing the economic crisis, but resumed the scheme this year by admitting a number of Syrians and Iraqis.

The UNHCR welcomed the commission’s proposals, saying they contained better ways of allowing legal entry into the EU for people fleeing war and provided a fair redistribution of refugees across member states.