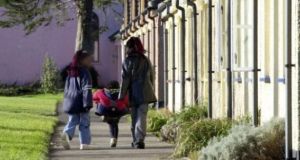 Asylum seekers are given very little information about how to find accommodation or how to pay for it. Photograph: The Irish Times

Difficulties finding a place to live, accessing education, as well as financial and emotional difficulties are experienced by people leaving the direct provision (DP) system, a report from the Irish Refugee Council shows.

Asylum seekers, some of whom spend up to 10 years in direct provision (DP) accommodation centres, are usually given just 21 days to move out once they are granted protection, according to the report.

Transition, from direct provision to life in the community, was published on Wednesday by Minister of State for Equality and Immigration David Stanton.

Drawing on interviews with 22 former asylum seekers, it finds the experience of living in direct provision, where they are not allowed to work, usually have no access to cooking facilities, are often in isolated rural locations and sharing cramped living conditions, affects people’s self-esteem and confidence, exacerbating the challenge of leaving.

The DP system was established in April 2000 to accommodate the growing number of asylum seekers. There are 35 centres around the State. All meals are provided and residents are entitled to €19.10 per week for adults and €15.60 for children. They are not entitled to child benefit.

Those granted refugee status describe getting the news as “the best day of my life”. However, after the “systemic infantilisation and loss of autonomy while in direct provision” they are “ill prepared” for leaving.

They are given very little information about how to find accommodation or how to pay for it, and are “generally dependent on non-statutory sources” such as friends and NGOs, for information.

They also had difficulties providing two months’ rent in advance and paying for items like sheets and crockery and often were not told they were entitled to exceptional-needs payments from community welfare officers.

According to figures from the Department of Housing, about 500 people granted asylum remain in their DP centres, as they are unable to move out.

Many that get housing find leaving their former home and supports in DP traumatic. Such task as managing bills and shopping for their own groceries were extremely difficult.

“For the most part people who took part in this study [had been] left to their own devices.”

Children also had difficulties making the change – missing friends and the routine in DP. “Some asked to be brought back to the accommodation.”

Among the barriers identified was access to education where the rule is that to be eligible for the back-to-education allowance a person has to first be on jobseekers’ allowance for nine months.

Among the report’s recommendations are that asylum seekers be prepared for life after DP and that such an address be deemed acceptable for welfare applications, that a “resettlement grant” be provided to help with the costs of leaving DP.