Protest works – if it breaks rules

The water-charge demonstrations have worked because of civil disobedience. When people break the rules of protest they force governments to act 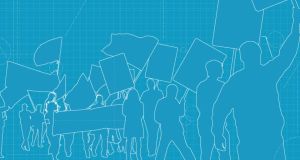 Protest is about forcing change rather than asking for change. Illustration: Dearbhla Kelly

‘I don’t normally go to protests” is a common remark in the kind of vox pop you might have read about the recent anti-water-charge marches. That people feel the need to clarify this is partly informed by a sense that there is something inherently wrong with being “a protester”, as opposed to simply taking part in this protest. A couple of years ago one of the founders of a campaign against plans to drill for oil in Dublin Bay told me: “We’re not protesters. We’re concerned residents.”

This reluctance to identify as a protester is odd, as to protest, in its various forms, is one of the most valuable social acts. Had there been no protest in the past we would surely live today under some form of feudal slavery.

It is to protesters of the past that owe all the major rights and freedoms we take for granted. The history we learned at school may not reflect it, but a people’s history – our real history – is largely defined by protest.

To quote the 19th-century African- American activist Frederick Douglass: “Those who profess to favour freedom and yet depreciate agitation are people who want crops without ploughing the ground . . . It must be a struggle. Power concedes nothing without a demand. It never did and it never will.”

Mocking idealism: a rite of passage

Yet dismissing agitation remains a popular pastime among some who profess to favour freedom. Mocking idealism is their rite of passage to maturity. The notion that ordinary people can change society is often derided, as is the very idea that people should try to imagine an alternative. Protest is not only a manifestation of public anger or desire: it can and does effect positive social change.

But, today, do we not have sophisticated structures and processes through which we can agitate for change? That thing called parliamentary democracy?

The reality is that some people – plus, in particular, large companies – have a vastly greater capacity than others to influence policy and to shape society, through lobbying, public relations, advertising, think tanks or simply acquaintance with politicians and civil servants. Those with less social power – most people – must find other ways to agitate for change, to influence political decision-making, and protest is the obvious one.

Our highly centralised political system relies heavily on experts, bureaucrats and the logic of free-market fundamentalism to form policy. The views of real people rarely register. And mainstream media confines public discourse within narrow parameters. Protest can widen those boundaries and force new issues into the debate.

Although the water protests have seen people take collective action to improve or safeguard their own situation, protest is often an act of solidarity with others – such as the marches this year in support of people under siege in Gaza. Solidarity is a requisite for a just society, although the political establishment often seems to want us to think otherwise.

Three years ago, as minister for justice, Alan Shatter accused some Shell to Sea protesters – those not living full-time in north Mayo – of being “self-indulgent protest tourists” because they travelled from other counties, or even countries, to act in solidarity with an isolated community. His attempted smear was in keeping with years of media coverage that obsessed with whether protesters were “outsiders” or locals.

A similar logic has been at work in commentary on the water protests, with suggestions that “nonresidents” have no right to enter an area in support of others. The message is that people should act only in their own interests.

If this is our worldview we might need to reassess the legacy of the Dunnes Stores strikers of 1984, who stepped outside their own spheres of interest by refusing to handle South African goods, in solidarity with black people in apartheid South Africa.

The converse of solidarity is self-interest, the driving force of commerce and capitalism, a value celebrated in our competitive culture. The simple act of group protest, especially in solidarity with others, is a defiance of this culture of individualism and an assertion of the values of community and co-operation and the power of collective action.

Many protests fail. It is easy to lose faith when huge numbers take to the streets and their demands are ignored. In February 2003 up to 100,000 people marched in Dublin in protest against the impending US-led invasion of Iraq, demanding that the government stop allowing the US military to use Shannon Airport as part of the operation. Nothing changed.

Why have this year’s water protests been so effective in comparison? There are several reasons, but a major one is the element of civil disobedience and direct action.

Before October’s mass demonstration it was already clear that many people were prepared to block the installation of meters and to refuse to pay water charges. When people came on to the streets in such big numbers to march they were confronted by their own power: here were tens of thousands of others who also would not pay. And the Government obviously saw that too.

When people simply march they can be ignored. When they break the rules of protest they force governments to act. You could say it’s about forcing change rather than asking for change.

A good indicator of the value of protest is the extent to which attempts are made to both undermine it and impose rules on it. You know your protest movement is threatening the existing order when powerful interests try to demonise it.

By this measure the water protests have been a tour de force, prompting such language as “thugs”, “mob frenzy”, “antidemocratic”, “riotous”, “hijacked”, “sinister”, “dissident republicans” and even “Islamic State”.

The Ministers, media commentators, “Garda sources” and others who make these claims also seek to set strict rules of engagement, to define “legitimate” protest: don’t block the road, don’t break the law, don’t stray outside your own neighbourhood and so on.

As well as being an attempt to tame protests, these rules aim to create a distinction between “good protesters” and “bad protesters”, to foment division and mistrust within protest movements.

Even if a protest does not achieve its immediate goal, there can be many spin-off benefits. The act of protest inspires solidarity and builds community. In developed countries such as Ireland that have become atomised – where many feel isolated and powerless – collective action often gives participants an empowering experience of, and the skills for, community organising.

It can also be educative, revealing more about how society and power operate. It provides the space to discuss alternatives and to imagine different ways of organising society. Often new movements and networks emerge from and outlive the protests.

Quite a few people in Ireland seem to have been newly politicised in recent months, awakened to their ability to effect change, becoming active citizens and realising that to be politically disengaged is to derogate decision-making to others.

And being radicalised, in part by making the mental leap from believing the mainstream narrative that frequent protesters are deluded or even sinister to seeing for themselves that they are people just like them and that what is antidemocratic is not the protests but the scare stories that deter protesters.

William Hederman is a journalist, photographer and regular protester