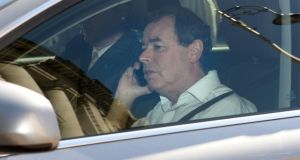 Minister for Justice Alan Shatter. ‘Access to Citizenship and its Impact on Immigrant Integration’ found that the Minister for Justice had absolute discretion in granting citizenship, which led to a lack of transparency of conditions and unequal treatment of applicants. Photograph: Dara Mac Donaill

Access to Citizenship and its Impact on Immigrant Integration found that, by 2008, just 13 per cent of foreign-born immigrants here had become Irish citizens compared to an average of 34 per cent in the EU-15 countries, the second lowest rate after Luxembourg.

The study found that documentation requirements were more onerous in Ireland than in all EU-15 countries except Italy and Greece. It also found that application costs, coupled with the additional fee for a naturalisation certificate, were higher here than in nearly all other European countries.

It also found that the Minister for Justice had absolute discretion in granting citizenship, which led to a lack of transparency of conditions and unequal treatment of applicants. Migrants who have been refused citizenship do not have access to a formal appeal system to challenge the decision and are not provided reasons for the refusal of applications.

Despite recent improvements in processing applications, not processing family applications jointly and “sub-optimal communication between departments and authorities” can cause severe delays too.

The Irish handbook was prepared by the Migration Policy Group, a Brussels-based think tank, in cooperation with the Immigrant Council of Ireland. The project was funded by the European Fund for the Integration of non-EU Immigrants.

1 Covid-19 restrictions may lift more quickly if case numbers keep falling
2 Maureen Dowd: Trump has been wearing a mask for years
3 Archaeologists are ‘quite sure’ they have found Red Hugh O’Donnell’s burial place
4 Pricewatch: Left on the shelf - what we are no longer buying
5 Tax on Covid-19 payment could cause 'terrible shock' late in year
Real news has value SUBSCRIBE