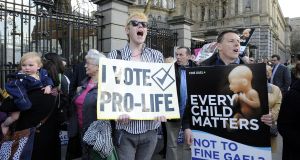 An anti-abortion protest outside the Dáil. Life Institute has criticised a British family planning agency after it launched a free aftercare helpline for women in Ireland who have taken abortion medication. File photograph: Dave Meehan

The anti-abortion group the Life Institute has criticised a British family planning agency after it launched a free aftercare helpline for women in Ireland who have taken abortion medication they bought online.

The British Pregnancy Advisory Service (Bpas) is extending its helpline to women in Ireland, Northern Ireland and the Isle of Man who have bought abortion pills online from two not-for-profit organisations.

Bpas said women who could not travel for an abortion had “no choice” but to break the law and order pills on the internet.

Bpas said women in Ireland were increasingly using this option as the logistics and costs of travel, treatment and accommodation abroad could be prohibitive.

It said the pills provided by the two organisations were “a safe, effective alternative for women unable to continue their pregnancies”.

Following the launch of the helpline, Life Institute spokeswoman Niamh Uí Bhriain said Bpas “would be better served helping women to have their babies than spending money on trying to interfere in Ireland’s laws on abortion”.

Ms Uí Bhriain described the Bpas move as “a stunt designed to promote abortion rather than a genuine effort to help women”.

“Maybe they would consider putting this time and money into actually helping women, who are all too often seeking abortions in fear and panic, have their babies and raise their babies,” she said.