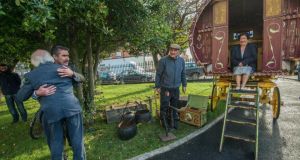 local authorities to fulfil their obligations on providing Traveller accommodation.

Speaking at an event celebrating 30 years of Pavee Point, which advocates for Traveller and Roma human rights, he called for a moment of silence to mark the Carrickmines tragedy in which 10 Travellers died in a fire last month.

A total of €4.3 million was provided by the Department of the Environment to the 31 local authorities for Traveller accommodation this year, down from €70 million in 2008.

“I appeal to the local authorities to try again, but to try again in a different way, so that we can move forward. We can’t really stay where we are at the present time where it isn’t even an issue of money and where many local authorities who have been allocated resources are simply not spending it,” said Mr Higgins

Mr Higgins said the issue of ethnic status for Travellers “needs to be treated seriously and must respect complexities of culture”. Earlier this month the Government rejected by 58 votes to 39 a Sinn Féin motion in the Dáil calling for the State to grant ethnic minority status to Travellers.